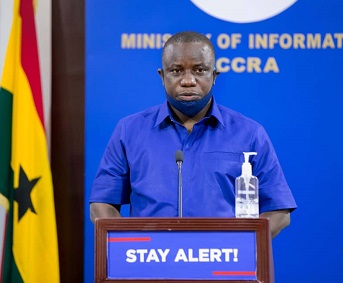 The government has denied allegations that it deployed military personnel to Ghana’s border towns to intimidate residents from participating in the voter registration exercise scheduled to commence today.

Minister of Defence, Dominic Nitiwul, addressing a press conference in Accra yesterday, said the military deployment was in support of the Ghana Immigration Service (GIS)’s efforts to stop illegal entry of foreigners through unapproved routes along the borders.

Explaining further, he noted that, the decision to deploy military personnel was informed by government’s commitment to protect the populace in the wake of the coronavirus (COVID-19) pandemic and not targeted at instilling fear or suppressing a group or tribe.

The government, he said, commenced the deployment of military personnel together with police, GIS and Ghana Revenue Authority (GRA) personnel on February 21 last year in an operation dubbed “Conquered Fist,” designed to enforce border laws in the country.

Following the closure of Ghana’s borders amid the COVID-19, Mr Nitiwul said, the government decided to improve security along the borders due to significant increase in the use of unapproved routes by foreigners to enter the country.

During the period of lockdown alone, more than 5,000 persons were arrested for entering the country through one of the 500 illegal routes identified so far by the country’s security teams.

On March 30 and April 20 this year, the Minister said, military personnel were also deployed together with the police as part of ‘Operation Calm Life’ to ensure increased security during and after the lockdown in some parts of the country.

A further deployment was done on June 18 and 19 to all border towns to support existing teams to close all unapproved routes to deal with illegal entry, the Minister added.

He noted that the Ministry was in the process of deploying some other personnel to Gyaman North and Dormaa, both in the Bono region.

He said marine security has also been tightened through increased patrols to prevent illegal entries.

He, however, noted that the Ministry would investigate allegations that some military personnel were intimidating residents in the area of deployments.

Mr Kojo Oppong Nkrumah, Minister of Information, denounced comments by some political actors that the deployment of military personnel in the Volta Region was an attack on the people of the area.

He said government was not prepared to engage in politics that borders on ethnocentrism and urged opposing political parties to refrain from stirring ethnic sentiments and focus on supporting the country’s development.