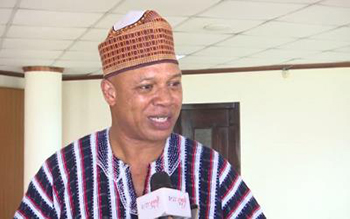 The Minority in Parliament is disputing claims by the Minister of Energy, John Peter Amewu, that the government has settled in full its indebtedness to the Electricity Company of Ghana (ECG).

The caucus has, therefore, challenged Mr Amewu to come out with the total debt portfolio in the energy sector so that Ghanaians appreciated the true state of indebtedness of the country in that sector.

Mr Amewu at the Ministers’ bi-weekly press briefing in Accra on Tuesday to update Ghanaians on the coronavirus (COVID-19) situation said the government had cleared the legacies debt in the sector including the GH¢2.63 billion it inherited from the previous government.

“It is a fact that on assumption of office, this administration was confronted with a huge indebtedness to the ECG. As of December 2016 the state owed ECG GH¢ 2.63 billion. Government ensured it was current on all bills incurred from 2017,” Mr Amewu said.

But the ranking member on the Mines and Energy Committee and Member of Parliament for Damango, Adam Mutawakilu, briefing the media in Parliament yesterday said the claims by the Energy Minister were not true.

“Currently, the ECG owes the Ghana Gas Company more than US$800 million, and, if you multiply $800 million by the exchange rate of GH¢5.5 that is over GH¢4 billion owed to one company. Besides, independent power producers have not been paid US$1.26 billion.

With the introduction of the Energy Sector Levies Act (ESLA), he said, the debt had dropped to US$2.2 billion as at the end of 2016.

“So before President Nana Addo Dankwa Akufo-Addo came to power, he knew that the energy sector debt was $2.2 billion and this is made up of what government owed the ECG, suppliers, independent power producers, banks and others.

“So by just coming to pick one item to analyse and say that you are doing well cannot be used to measure your performance.

“We call on the Minister of Energy to tell us how much debt is left for Ghanaians to pay, what has the ESLA, introduced by former President Mahama raised and how much they have been able to manage and to pay so that we will be able to know the total debt of the energy sector,” he demanded.

He claimed that out of what government had paid to fuel suppliers, the highest beneficiary was StratCom Energy which he alleged belonged to “family and friends of the Energy Minister.”

“So the payment of liquid supplied is just to liquid his family and friends to make money when independent power producers had not been paid US$1.26 billion.

“That is why we are asking that the Minister of Energy comes with the whole portfolio of debt so that we will know exactly how much we do owe as a country in the energy sector,” he stated.