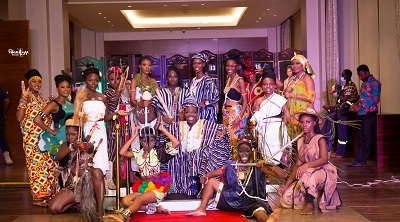 All the 16 contestants took their turn on the runway to showcase the various cultural heritage of the regions in Ghana through their fascinating costumes.

Most of the costumes were dominated by festive regalia among other acessories from headgears, footwears, and farming implements.

Speaking at the event, the Director of Operations at Miss Tourism Ghana, Mrs Delphine Brew-Hammond, said this segment of Regional Costume competition was the first of its kind .

According to her, they introduced it to ensure that the contestants who would have the opportunity to represent the country at Miss Tourism World and other international pageant were properly groomed.

She said even though it was the first time,  the contestants did it seamlessly which was a good sign of preparedness ahead of the grand finale.

“This was the first time, we asked them to do a bit of research in addition to the training they’ve had from us, and for them to exhibit such performance need to be applauded,” she said.

Mrs.Brew-Hammond expressed her appreciation to all the stakeholders who helped in training the contestants and sponsors for being there for them.

Ahead of the grand finale on August 27 at the National Theatre, contestants will battle each other in Culture Day and Debate, Regional Cooking Contest, GTP fashion show and Read Ghana Night.