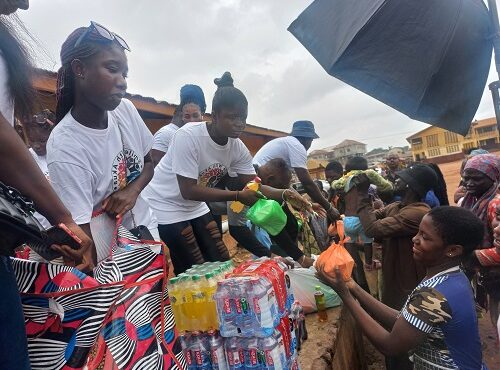 Together with some donors and her team, Highly Spiritual Music decided to impact lives as part of her birthday celebrations.

Speaking to The Spectator, she said “I decided to celebrate with the children on the streets on my birthday, this is going to be an annual ritual from the Smile With Akua Foundation, and it is my expectation that it will keep growing bigger in the years ahead.”

According to her, she had been there before and had always decided to  positively impact the lives of the downtrodden.

Akua further added that she felt excited seeing the numbers that turned up for the programmed saying that it had gladdened her heart to do more.

The model encouraged them not to give up regardless of the challenges they faced in life, but believed that with hard work, their situation could be changed.

She expressed appreciation to Bel Beverages and Luminary DMR for their support in making her dream a reality.

Musician and label mate, Luminary DMR who joined Akua to embark on this mission congratulated her, and urged celebrities to use their influence to impact lives in society.

He hinted on dropping video for Agyeiwaa song of his recently released Discovery album.