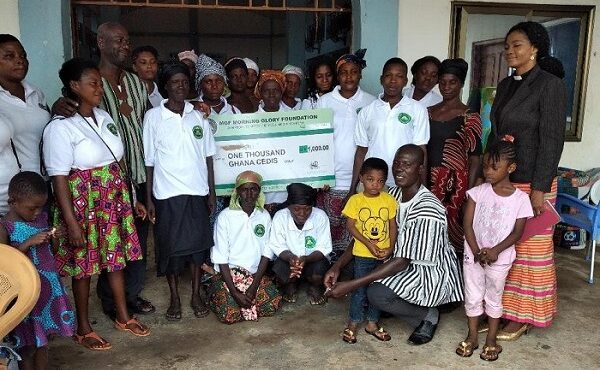 Morning Glory Foundation (MGF), a non-profit Christian organisation has donated GHC 1, 000. 00 each to 15 needy widows, including an 87-year-old woman at a ceremony at Dabala, in the South Tongu District of the Volta Region.

The octogenarian, Madam Deborah Viletor, had given birth to seven children but unfortunately lost all of them, with her last surviving child buried this year.

The gesture which formed part of MGF’s second -year of donating to support needy widows and single parents in the society, was also used to provide a two-day entrepreneurial skills training for over 300 female residents atDabala and its environs.

The training include making of pastries, producing liquid soap, local drinks, detergents and arrangement of beads to make them self-reliant.

The founder and leader of MGF, Rev Davida Matti-Atapka, said the foundation was started to support poor widows who were left unaided but compelled to toil and cater for their children.

She said it was unfortunate that most of the widows were subjected to inhumane treatment following the death of their husbands, including expulsion from their matrimonial homes.

The founder disclosed that it was incumbent on society to ensure that people received love, the best of treatment, care and support to make them comfortable.

According to Rev Matti-Atakpa, it was refreshing to note that a few days after the training session,some of the trainees had commenced making use of the skills they had acquired.

The Queen of Agave Traditional Area, Mamaga Kakator Agarll, asked the participants to take the skills training they had acquired seriously because elsewhere, others had to pay much for such training opportunities, adding that those who had received financial support from MGF should put the money to good use to enable them educate their children.

She thanked MGF for coming to the aid of the residents in the community, and called on philanthropists andother groups to emulate them to bring development to the area.

Delving into the commencement of MGF, Rev Matti-Atakpa said on July 18, 2017 after she had breastfed her child at dawn, she felt a tap on her shoulder with the accompanied words, “Just as you have fed your child with undiluted milk, so must you feed my sheep with the unadulterated word of God each dawn.”

She said this literally gave birth to the formation of MGF with the sole aim of propagating the word of God, but thiswas later extended to caring for widows and single parents.