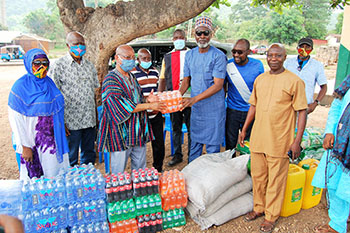 IT is high time politicians supported the celebration of the Ramadan in the Zongo communities with viable infrastructural facilities and not with the donation of food items alone, Sarki Ushaw Turawa, Chief of the Zongo community in Ho has said.

“We need Community-based Health Planning and Services (CHPS) compounds, decent school buildings and drainage systems in the Zongos more than anything else, for meaningful celebrations of the Ramadan,” he added.

Sarki Turawa made the remarks on Saturday when the MP for Ho Central, Mr Benjamin Komla Kpodo presented a consignment of food items worth GH¢ 4,500 to the Muslim community at the Sabong Zongo in Ho in support of the Ramadan.

The fasting period ends in a fortnight.

Sarki Turawa said that the Zongo settlements were not properly planned and that had seriously affected their development over the years.

The Ho Sabong Zongo, for instance, he said was established in 1963 hurriedly without the appropriate sanitation facilities.

Worse, Sarki Turawa pointed out, the land owners had not been paid their due compensations.

For that matter, the land owners were now demanding their compensations from the Zongo people, he revealed.

Sarki Turawa said that the situation had adversely affected the growth of the Zongo over the decades.

“Much as we are grateful for the regular donations of food items, we need to see basic amenities which will benefit generations yet unborn,” Sarki Turawa added.

On his part, Mr Kpodo said that the concerns of the Zongo community would be given the needed attention.

He said that some of the development plans for the Zongo were already being pursued.

The MP commended the Muslim community in Ho for its immense contribution to peace and goodwill in the society, and gave the assurance that their concerns would never be ignored.