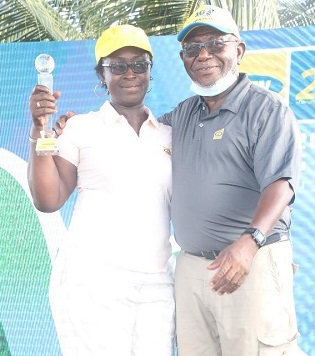 MTN Board Member, Mr Felix Addo has said that the company would ‘cement’ its relationship with the Bok Nam Kim Golf Club in Accra.

The club hosted MTN’s flagship golf event, MTN Invitational on Saturday, bringing hundreds of golfers to compete for honours in the championship that marked its 25th anniversary.

“The partnership between Bok Nam Kim and MTN is here to stay. More of such competitions would be organised at the club.

After hours of competition, Eric Ofosu-hene grabbed the Men’s GroupA trophy with 38 points ahead of Peter Ntiamoah and Nana Krakue.

Leticia Amponsah-Mensah emerged tops in the ladies version of that category with a classy performance ahead of Mariene Tonyigah and Elizabeth Essel-Koomson.

With a score of 42 points, the Men’s Group B event went to Victor Sarpong, followed by Justice Martey and Michael Agbodzah in second and third positions with 36 and 35 points respectively.

In an interview, the main winner, Ofosu-hene thanked MTN for organising the event which brought together the best golfers in the country to compete for glory.

“It feels good to play with some of the finest players around and emerge victorious. That comes with a good feeling and I hope it will continue.”