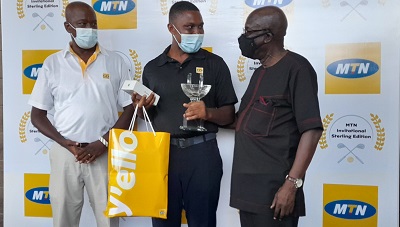 MTN Ghana has assured that the year 2021 will be an exciting one for the golf fraternity in Ghana.

Board Chairman for MTN, Dr Ishmael Yamson, gave the assurance at the first of this year’s MTN Invitational Golf championship played at the Achimota Golf Club.

The event assembled over 100 golfers from the various golf clubs across the country with Christopher Mbii winning after recording a net score of 41 in the Men Category A, followed by Church Ansah and Maxwell Ababio in second and third positions.

The Ladies Group was won by Alberta Lomofio with Jiang Yang and Rita Pellegrino coming in second and third positions.

The Seniors’ categories had Kweku Sekyim and Joy Arkutu as winners.

According to Mr Yamson, “the event is the beginning of many competitions that would be held within the year.”

Coinciding with MTN’s Silver anniversary in Ghana, MTN will commit to sports development including golf, promising to make the other event bigger and better.

The winner, Christopher Mbii commended MTN for the competition and vowed to work hard to defend the trophy at the other events.