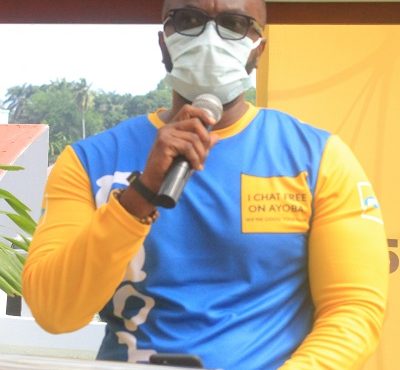 MTN Ghana has launched the 2021 edition of its month long Twincity Festival celebration in the Western Region.
The celebration, aimed at engaging customers with exciting activities, forms part of programme lined up to celebrate MTN’s 25th Anniversary and the 10th anniversary of Twincity Fest in the region.

Speaking at the launch, Mr. Prince Owusu Nyarko, the Regional Senior Manager of Southwest Business District, thanked stakeholders of the company for their loyalty to the brand for the past 25years.

Highlighting activities of the festival, he promised “an exciting future” for the company and the general public, adding that customers would be rewarded for their commitment to the brand.

There will be a football match between Sekondi Hasaacas and Sekondi Eleven Wise FC, the two traditional teams in Sekondi-Takoradi metropolis.

Touching on MTN’s 25th Anniversary Celebration, Mr. Owusu Nyarko stressed on the company’s investment at modernising and expanding its network infrastructure across the country to enhance customer service.

Metropolitan Chief Executive of Sekondi-Takoradi, Mr. Abdul Mumin-Issah, commended MTN for promoting sports in the region and pledged the Assembly’s support in making the festivity a memorable one.

Other activities include community fora, stakeholder engagements and Masquerade Carnival on July 31.
Twincity Fest is an MTN initiated month-long festival aimed at celebrating stakeholders and customers in the Western Region and its environs.
The celebration is to complement the myriad of festivals celebrated in the region that showcases the rich culture and customs of the people.