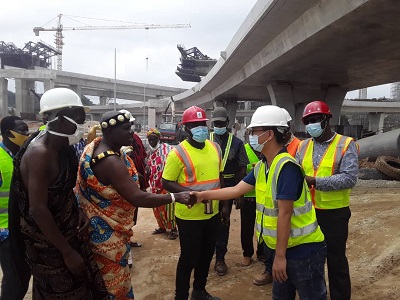 The Chief of Ayawaso, Nii Tettey Kodzo II and his traditional elders have paid a working visit to the ongoing Pokuase Interchange project to acquaint themselves with progress of work.

The Resident Engineer of the project, Mr Kwabena Bempong, who welcomed the chief and his entourage on site, said the 4-tier interchange when completed next year, was expected to reduce traffic congestion on the Ofankor-John Teye –Amasaman stretch of the Accra-Nsawam highway.

He said the project which was started two years ago was about 78 per cent complete, saying hopefully the project be completed by the first quarter of 2021.

The resident engineer explained that work on access roads linking the interchange was almost been completed to ensure smooth movement of motorists and other road users.

Mr Bempong indicated that the challenges they initially encountered such as the acquisition of properties, provision of electricity, removal of overhead cables among others were now a thing of the past.

Nii Tettey Kodzo II, in response, commended the government for the mega project being undertaken to reduce travelling time and long hours sitting in traffic.

He said they have sent a letter of petition to the President, Nana Addo Dankwa Akufo-Addo, that the interchange when completed, should be named after Nii Ayi Kushi, the first king and founder of the Ga Adangme State on which the project was located.

According to him, Nii Ayi Kushi was not only a traditional ruler for his people, but also as founder of the Ga Adangme State, he played a critical role in the political, economic and social development of the Gold Coast.

“Yet nothing was done in honour of our Great King,” he said, stressing that we pray that President Akufo-Addo honour this great traditional ruler of blessed memory.

Nii Tettey Kodzo II, commended the residential engineer and his construction team for the good work they have done so far and was very much impressed with the huge engineering edifice.