Names of the 51 female aspirants contesting in NPP’s primaries 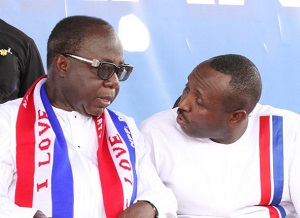 The New Patriotic Party (NPP) has announced the final list of parliamentary aspirants who will contest in the party’s upcoming primaries on June 20, 2020.

The party made the names of the qualified and accepted candidates public on Monday, June 8 following approval from the National Executive Council (NEC).

The announcement by the General Secretary, John Boadu was preceded by some expression of dissatisfaction by followers of the disqualified aspirants.

Mr. Boadu also expressed the party’s dissatisfaction with some of the behaviors of some of the disgruntled parties.

He opined that the NPP will no longer tolerate such “crass behaviour” from its members.

“We will make sure that our rules and regulations, particularly our disciplinary measures are instituted to instill discipline in our party,” he said.

Meanwhile, in announcing the candidates who have qualified to contest the upcoming parliamentary primaries in constituencies where the party has sitting Members of Parliament, it emerged that 51 females made the cut.

In outlining the guidelines for the conduct of the party’s 2020 parliamentary primaries, he said the polls would be conducted in the 168 Constituencies where the NPP has sitting Members of Parliaments (MPs) to elect Parliamentary Candidates for the 2020 General Elections.