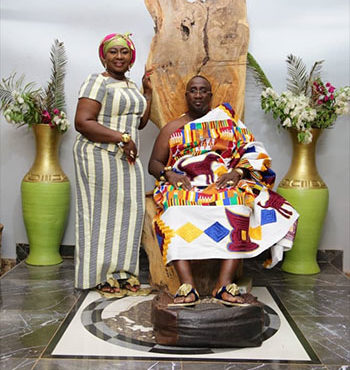 Poised for making development and transformation as a double edged-sword in his capacity as a chief, his pledge to ensuring that the narrative of inequality was changed in order to ensure gender parity in rural settings is achieved through sound and innovative policies in his kingdom and the country at large.

Despite a challenging impediment on him as a dyslexic, a condition that made it uneasy to exhibit his writing prowess, Nana Ansah Kwao IV, Chief of Akwamu Adumasa has surmounted all hurdles to become a beacon of hope to his society.

His unquenchable quest to bring freedom, sanity and decorum among his subjects was worth the cause as a good leader which made his rule more successful and an accomplished one.

Securing an indelible mark on his throne, Nana Ansah Kwao IV is of the assertion that “we must be planting trees today for tomorrow’s children to harvest and enjoy its fruits”.

According to him, the above statement is to ensure that the current generation lives a life that would impact and make life more comfortable for the future generation.

The Spectator in an interview with Nana Ansah Kwao IV delved into his noble life and his persevering nature to make the society a safer haven for all.

Hailing from a fortunate royal family called the Sintim Misa, Nana Ansah Kwao IV comes from a well educated family where his late grandfather, Rev. G.K. Sintim Misa was the Moderator of the Presbyterian Church of Ghana for 12 good years.

He was born to Kwame Danso Misa, a royal from Abomusu, the Akyempim Hene of Kyebi in the days of Kuntumkunnumkum and Nana Esi Danso Misa who hails from Adumasa in the Eastern Region.

According to him, his line of inheritance is matrilineal so he is a native of Adumasa and a royal in the family.

With a staunch educational family background, Nana Ansah Kwao IV was enrolled in various schools but struggled through his early stages due to his dyslexic condition.

“I changed schools because of my dyslexic nature, some of the schools I attended include Jack N Jill, St Martin de Porres, North Ridge School, Mpraeso Secondary School, Accra Academy among others,” he recounted.

Nana Ansah Kwao IV enrolled at the Methodist University College, Dansoman-Accra and bagged a Bachelor of Arts in Marketing.

Determined to be a change agent in his community, Nana Ansah Kwao IV had been practicing as a marketer both locally and internationally.

According to the astute chief, he gathered experiences from managing his father’s hotel and pharmacies after his O’ Level, where he learned customer satisfaction as a tool in marketing.

He later travelled to the United Kingdom (UK) where he worked with top notch shoe industries and popular automobile giants including Peugeot, Mercedes Benz and Audi by exhibiting sterling performances in the area of marketing.

“I really enjoyed life while working in the UK because it was an exposure to learning great things in the field of marketing,” he said.

Union of the stars

“In the year 2006, I started my radio show in the UK where the show ranked number two on the most listened to shows in the UK. When I came to Ghana and joined Rainbow radio, I met Oheneyere Gifty Anti who came there for a sponsorship and I realised she looked prettier than on TV. We linked up and dated in secret for three years until we tied the knot and we are blessed with a child,” he narrated.

Succession to the throne

His succession to the throne was a flexible and a peaceful one which made his transformation as a chief worth emulating.

Nana Ansah Kwao IV told The Spectator, the throne he occupied at Adumasa was vacant for 10 years, and the person to be enstooled was his mother’s bigger brother but he was too old to sit on the throne.

In an agreement, they wanted me to be the chief to make impact in the town through development and transformation.

His passion for girl-child empowerment made him put measures in place to ensure that, girls in the community were protected from all forms of abuses and were given equal opportunities.

He wanted at least every 5-year-old child in Adumasa to be able to read, so this made his wife Oheneyere Dr Gifty Anti open a well-stocked library in Adumasa to improve literacy rate in the town.

Nana Ansah Kwao IV paid Jolly Phoenix, a literacy training network to champion the cause of how to read and write among the children in Adumasa.

According to the noble chief, literacy rate in Adumasa has increased from 36 to 89 per cent, where majority of the students could read.

“Though the school is “syto”- a government school, I run it like a proprietor of a private school, where every teacher and head of departments report to me with their lesson notes,” he stressed.

Having education at heart and championing it to perfection to the benefit of all, the chief organises debates among the school children in the palace to improve the public speaking skills of the pupils.

As an environmentalist, he ensured that trees and wildlife in Adumasa were protected.

He also organises programmes for the youth and pupils in the town to remain focused on their aspirations in order for them to contribute their quota to society in future and under the auspices of resourced persons.

Nana Ansah Kwao IV, the father of four children, speaks English, Twi, and Ga and has in-depth knowledge in the traditions of Ghanaian linguistics.

Nana Kwao Ansah IV loves to ride motorbikes to experience the fresh wind and is also fan of tennis ball.

He enjoys eating any meal with ripe plantain either fried, boiled or grilled.

He advised the general public to ensure that, whatever decision or action they embarked upon should be futuristic for the unborn generation to benefit from.

“Whatever decisions you take today should not only affect generations yet unborn, it must also be beneficial to those alive and must be worthy, and accountable to God and your ancestors,” he cautioned.