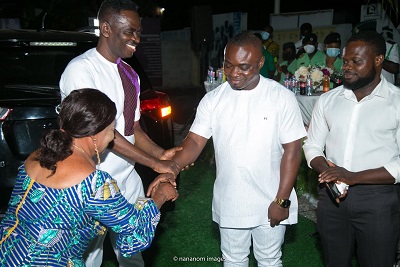 It was a moment of astonishment at the unveiling of a new music video of gospel music legend, Yaw Sarpong, with over four decades of experience in the industry.

The event meant for the premiering of the new music video at Think Media Expert at Kaneshie in Accra on Thursday, April 15, turned into a platform to pull surprises on Yaw Sarpong and his team.

At a point in the premiering, an SUV was driven in as a gift from his Executive Producer, Nana Kobo.

The car gift was timely, because after the team led by Yaw Sarpong was involved in an accident on their way to Kumasi,October last year, in their vehicle which damaged beyond repairs, they have resorted to commercial transport for all their engagements.

As if that was not enough, broadcaster Frank Kwabena Owusu announced that philantropist and Artiste Manager, Ayisha Modi who is currently out of the country had made available plots of land at Amasaman to be presented to Yaw Sarpong and Tiwaa.

Surprised at the gesture Yaw Sargong and Maame Tiwaa expressed their profound gratitude to Nana Kobo and Ayisha Modi for such support.

The music video of the song which featured gospel heavyweight, Kweku Gyasi, was directed by Kenn Ayiah.