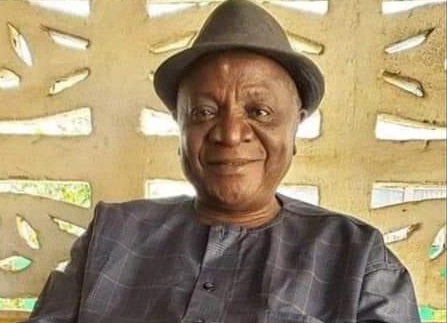 Reports coming in indicates that Nana Ampadu, had been unwell for some time.
This notwithstanding, the family is yet to release an official statement to that effect.

Nana Kwame Ampadu was a Ghanaian musician credited with numerous popular highlife tracks and he is known to have composed over 800 songs. Ampadu’s “African Brothers Band” was formed in 1963.

In 1964, young Ampadu met Mr. Jerry Hansen, leader and founder of the Ramblers Dance band and cultivated his acquaintance where Ampadu gave Jerry eight songs in all for free which the Ramblers Band recorded.

Some of the songs are Ntoboase, Afutusem, Scholarship, Me Nsoromma Bepue. All these songs became hit tracks. One good turn deserves another. Mr. Jerry Hansen seeing the musical competence in Amapadu, introduced him to Phillips West Africa Ltd., a recording publishers and Ampadu was given the chance to record two single tracks for a 45 R.P.M release.

The maiden recording was done at the Ghana Film Industries Corporation (G.F.I.C) on the 14th of November 1966.

The 1st track that was recorded that day was Agyanka Dabere with Suminaso Ntonko as the flip side. This single was released on 21st December 1966.

The single album became an instant hit and served as a beginning of a new era in the guitar bands sector. The thought provoking nature of the lyrics in those two title tracks, made many people felt it was some old or veteran musicians who sang these songs.

From this stage, promoters and producers chased the group for recording and performing engagements.
Some of his popular tunes include Obra (which became the theme song for one of the Akan Drama shows aired on GTV on Sundays), Getty, Oman Bo Adwo, Ebi Te Yie, Kofi Nkrabea, Yaw Berko and Obi Benya Wo.