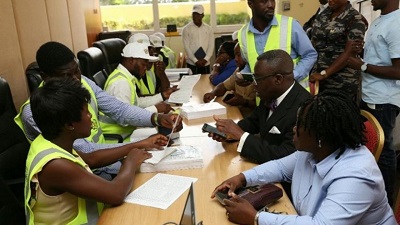 The country finds itself now in a place where there is tension and people are worried that there could be chaos between now and December as we prepare for the elections.  This is not a prediction of doom but a proper assessment of the political scene prevailing in the country. This situation could have been easily avoided if previous administrations had prioritised the provision of a National Identification Card and done their job as expected.  The current tension in the country has to do with the voters’ register, which is a prerequisite for the elections in December, both parliamentary and presidential.  In order to qualify as a voter, a voter’s name must be on the voters’ register and so for any political party to do well in the elections, its supporters’ names must appear on the voters’ register which is compiled by the Electoral Commission (EC).

The only institution mandated by the 1992 Constitution to conduct elections in this country is the Electoral Commission (EC).  EC has declared its intention to carry out a registration process that would lead to a new voters’ register.  This has led to a section of the players in the political arena mainly led by the largest opposition party the NDC, vehemently opposing the EC in its intention to compile a new voters’ register.  A couple of demonstrations had already been staged across the country by a group led by some leading members of the NDC and some smaller parties to communicate their displeasure to the general public about the intended actions of the EC.  Some Civil Society Organisations (CSOs) have also voiced their opposition to the compilation of a new voters’ register claiming that the current register is credible and must be used for the December elections, but the EC disagrees in no uncertain terms.

Issues that those opposed to the compilation of a new voters’ register include the assertion that the current register is credible, that it would cost a lot of money to compile a new register, that the time left for such an exercise to compile a new voters register is too short and it has the potential to plunge the country into chaos.  The EC   on the other hand has also claimed among others that the compilation of a new voters’ register was initiated by the previous management and produced documents to that effect.  It further produced a letter from the old vendor of the elections management system which stated that most of the equipment had reached their end of life and have become obsolete.

There has been a history of disagreements by various political parties and the EC since 1992.  This has led to the creation of an Inter-Party Advisory Council (IPAC) to resolve any disagreements and to provide a consultative forum, so parties and various stakeholders’ views could be taken on board by the EC in major decision making and implementation.  There seems to be bad blood or call it mistrust between the current leadership of the EC and the opposition NDC right from the first IPAC meeting initiated by the current EC boss, Madam Jean Mensa.

The EC did not help matters in deepening the mistrust by pronouncements of one of its commissioners to the effect that the NDC was a threat to Ghana’s democracy and also the issuance of invitations to the various stakeholders to attend the latest IPAC meeting which was to take place on May 25, this year.  A mistake was made in the date stated on the invitation letter.  When the EC realised that instead of 2020, the year was stated as 2010 according to an interview granted by Asempa FM to the National Communications Officer of the NDC, on the May 25, 2020 meeting.  The EC then sent a second letter to the NDC, telling them to disregard the previous letter since it contained some errors, and to take note of the second letter.  Then the comedy of errors began.  The second letter for some reason that only the EC can explain, had the date corrected alright but the time for the meeting was then changed from 10am to 10 pm.  The NDC then latched on to the second letter and claimed that they did not attend the meeting because the second letter stated 10 pm only for them to hear that the meeting had taken place at 10am that morning.  The NDC further stated that the current EC was incompetent if they could bungle a simple invitation letter like this and you cannot begrudge them; if you give ammunition to your opponents, they would be used against you.  The other parties attended the meeting based on the second letter which also was the same as that sent to the NDC because they sought clarification from the EC and realised that the time of 10pm in the second letter, was a mistake.

A careful examination of the positions of the EC on one hand and those opposed to the compilation of a new voters’ register tilt the debate in favour of the EC.  Those opposed to the EC, particularly the NDC started with the position that there was no need for a new voters’ register since we had used the current register to conduct the recent referendum on whether DCEs must be elected and that it was credible.  The EC came out with information from the previous management as far back as 2015 to the effect that there was the need to revise the system and, therefore, the current voters’ register.  According to ghanaweb.com of May 18, 2020 the use of National Identification Authority (NIA) card had been a requirement since 2012, so the claim by the NDC that making the NIA card a requirement under the current CI is an attempt by the EC to cheat for the NPP, falls flat.  Again, the EC had admitted that it had not been able to completely delete the names of those who had used National Health Insurance cards from the register as ordered by the Supreme Court and, therefore, to allow the use of the current voter ID cards as one of the required identification documents, would create legal problems for the commission.

The constitution has cast in stone, the date of December 7, in every election year, so there is no option for the EC but to conduct elections for both the presidential and parliamentary, on that day come rain or shine.   Given this situation, the EC has taken the firm stance that it would compile a new voters’ register.  In relation to the independence of the Electoral Commission, there is no argument about it since the flag bearer of the NDC, Former President John Dramani Mahama, has made a statement alluding to that fact.  The NPP and the current President have also no problem with that fact, so the way forward is for all sides to accept the fact that a new voters’ register would be compiled and support the EC to carry out its constitutional mandate and not spew out unsubstantiated claims.

What needs to be done going forward, is to ensure that the NIA registers every Ghanaian so that there would be a database for all Ghanaians.  The EC can then extract all those who are above 18 and compile a voters’ register which would be acceptable to all stakeholders because it is compiled from a credible source.