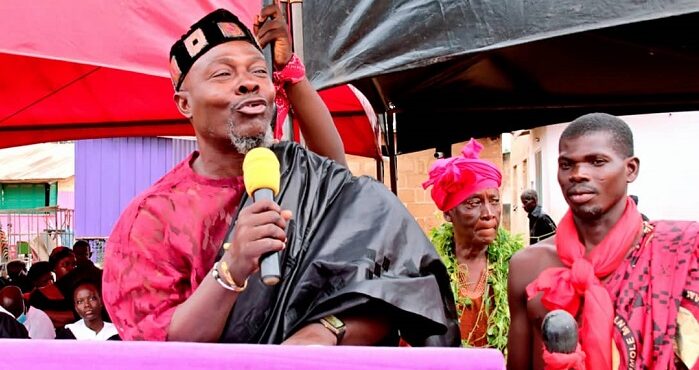 • Nii Ashittey Tetteh addressing the gathering at the funeral

The late AmamoleMantse and a former Director of the Ga North Municipal National Commission for Civic Education(NCCE) Nii Tetteh Okpe II laid to rest at Amamole, near Pokuase recently.

The two government officials extolled the virtues of the late Chief and described him as “a peacemaker that brought development to the Amamole community.”

They admonished the Kingmakers to replace him with someone who was not only competent and legitimate but also a unifier who would promote peace and development.

The Acting Chief of Amamole and Head of Nii Okpe family, Nii Ashittey Tetteh, ensured the successful performance of the funeral.

He said the peaceful and hardworking attributes of the late Chief should be emulated by the youth.

Nii Ashittey Tetteh said at the appropriate time, a new and legitimate Chief would be enstooled to continue the good works of the late Chief.

Nii Tetteh Okpe who ruled for over two decades, died about a year ago.