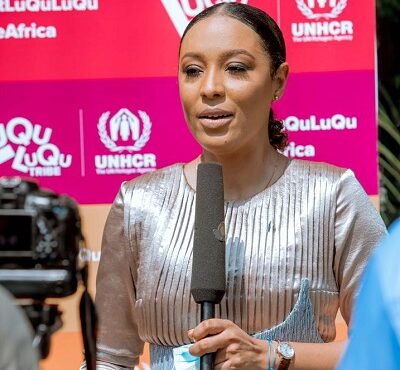 Ghanaian actress and media personality, Nikki Samonas has pledged her commitment to raise funds to support refugees in the country.

This follows her announcement as a goodwill ambassador of The United Nations High Commissioner for Refugees (UNHCR) a UN agency mandated to aid and protect refugees.

Speaking to The Spectator at the unveiling, she said from her experience in the refugee camps, she would do everything possible to raise funds for the upkeep of refugees.

Nikki Samonas added that she felt empowered for the recognition and further appealed to individuals and corporate entities to support their fund raising campaigns.

Their journey in supporting the people who have been forced to flee their homes or countries began in 2017 with UNHCR’s LuQuLuQu campaign. In their roles as LuQuLuQu High Level Influencers, they have used their voices to help change the narrative of refugees.

In 2017, Nikki visited Ampain refugee camp in Ghana to learn more about UNHCR’s emergency response work and meet with refugees .

Their appointment comes at a time when UNHCR’s Global Trends Report states that over 79.5 million people worldwide are forcibly displaced.