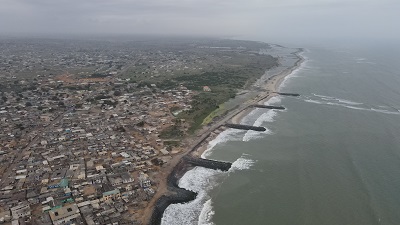 In a bid to address the devastating effects of tidal waves along the coastal belt, the government, about three years ago, began the construction of a sea defence wall on the shores of the Ningo-Prampram District.

The about $69m project, under the Ningo-Prampram Coastal Protection Project,  is meant to protect the five-kilometre stretch from tidal waves, beach erosion and flooding.

When completed, it would among other things, protect the livelihoods of the people, and boost domestic tourism in the Ningo-Prampram area – one of the tourist destinations in the country.

A recent visit to the site saw engineers putting finishing touches, indicating that the project could be completed by the end of December, this year.

When the Works and Housing Minister, Mr Francis Asenso-Boakye, paid a visit to the site in July, Mr Kwasi Sarpong Osei, Project Manager of Messrs Bridge Global Consolidated Limited, the construction company undertaking the project, stated the readiness of the company to go by the project schedule.

Mr Osei said about 2.6-kilometres out of the total five-kilometres sea defence project, had been completed, adding that the remaining 2.4 kilometres would be finished in due time.

He, however, appealed to the government to expedite the release of funds to fast-track work on the project.

The aerial shots captured by the reporter depict the extent of work completed at the site. Some residents have so far expressed satisfaction at the project and are hopeful that it would bring them some relief as they go about their daily activities.

Coastal erosion and flooding which continue to affect the communities along the coast could be traced to the impact of human activities, climate change and rise in sea-levels.