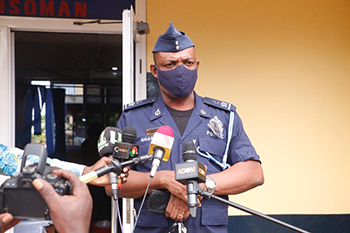 The District Commander of Police at the Dansoman Division of the Ghana Police Service, Chief Superintendent Daniel Jeffrey Darko has refuted claims that a number of inmates have tested positive for COVID-19.

He therefore urged persons spreading fear to desist from doing so as their conduct may scare people from reporting criminal offences.

Speaking to journalists yesterday after a disinfection exercise undertaken by Zoomlion Ghana Limited, Chief Supt. Darko, said, test results would be announced to the members of the public as soon as it is ready.

In other to curb the spread of COVID-19, Supt. Darko said police cells had been decongested, while persons who committed lesser offences were granted bail.

He said if there was enough evidence to prosecute suspects, criminal proceedings were done immediately while investigations were expedited in cases without evidence.

He expressed his profound gratitude to Zoomlion for sanitising Chorkor, Korle Bu and Mamprobi police stations- all under the Dansoman District.

His colleague, Chief Supt Cephas Arthur, the Commander of Mamprobi Police Station said fewer inmates were detained in adherence with social distancing protocols to prevent the spread of the disease.

When asked about the need to re-engineer police cells, he said the police would welcome any support from the members of the public.

Mr Morgan Acquah, General Manager at Zoomlion Ghana Limited said disinfection of all 101 police stations in the Greater Accra Region is expected to be completed by next week.

A few weeks ago, Zoomlion Ghana Limited began a nationwide disinfection of all police stations including offices, cells and barracks.

Prior to that, the waste management company had undertaken similar exercise across the nation in public and private tertiary institutions, markets, lorry stations and the judiciary.

Currently, Zoomlion is offering a 50 per cent discount on its services to private businesses, establishments and companies.