No sex on eve of elections – journalists advised 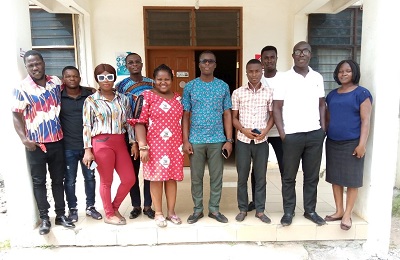 A seasoned media practitioner and consultant, Madam Ivy Priscilla Setordjie, has entreated journalists assigned to cover the December 7 polls to abstain from sex on the eve of election.

“The general elections are a sacred national event which requires all your energy and concentration to cover accurately,” she told participants at a recent training on ‘Election Reporting’ at Ho.

According to her, recovering from a hectic and stressful sex session the night before, could affect the performance of a journalist on the field the day after.

The training was organised by the Multimedia Group, Joy News, in the series for 30 journalists in the Volta and Oti regions in the countdown to the polls, to ensure precise reporting and media professionalism on the presidential and parliamentary elections.

Madam Setordjie who was a facilitator and a resource person at the programme again cautioned the participants against taking alcohol, saying any reporter who turned up drunk at a polling station would be doing a great disservice to the nation.

“A serious journalist on a crucial national assignment must avoid anything which would distract his attention from the task ahead of him, she said.

The media consultant reminded the participants that, their duty on that day was not to engage in unnecessary arguments with officials of the Electoral Commission (EC), party agents and personnel of the security agencies.

“You are to report on the facts on the ground without sacrificing your neutrality and professionalism,” Madam Setordjie warned.

On the safety of journalists, she asked the participants to identify a safe exit at every polling station and leave as soon as possible if the ground turned hostile for them.

“No assignment is worth your life and so safety first, report later,” she said.

The topics treated at the training included Election Day coverage principles, Use of cameras at polling stations, and News updates on elections, among others.

However Dr Kojo Cobba Essel, a medical doctor and an ISSA certified expert in exercise therapy, fitness nutrition and corrective exercise, believes individuals must not be deprived of sex before work.

He noted that it was sex “enhanced by other factors” such as aphrodisiacs that actually drains one’s energy.

According to him, if individuals engaged in “responsible sex” without the use of aphrodisiacs that could “actually reduce a lot of stress.”

“If you are not going to take any aphrodisiac and you do it like your regular sex you are going to be less stressed when you wake up,” he noted.