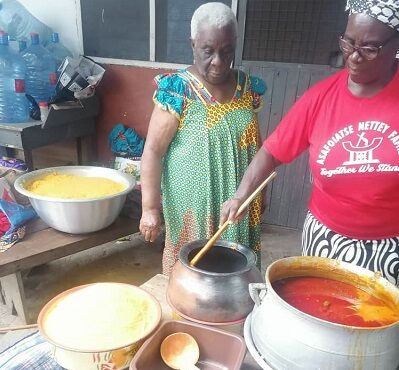 Asafoiatse (CB) Family marked this year’s Homowo festival with a family reunion party in their house at Swalaba popularly known as “Phobia House” in Accra.

Descendants from all over Ghana and abroad converged at the house known to have given birth to Accra Hearts of Oak in 1911 to celebrate the festival and share nostalgic times together while networking for broader family links.

Briefing The Spectator on the reunion party, Christopher Darlington Nettey, a member of the family said the family which was now extended beyond the shores of Ghana had always used the festival to bring kinsfolk to the family house not only to fraternise but also to deliberate on issues relating to the progress and peaceful coexistence of family members.

” We usually meet here to take decision on burial activies of our departed beloved ones and since we cannot mix that with partying, we set this day aside to have fun and take into account past issues which need our attention,” he said.

Mr Nettey said the focus this year was to ensure the nominations for two vacant positions,being the Head of Family and the Asafioatse of the clan to occupy his position at the Gbese Mantse palace.

He said the two positions which were paramount to the hierarchy structure of the family had remained vacant since the Family Head died a few months ago.

Mr Nettey said since the Family Head was the one to nominate the Asafoiatse,it has then become imperative to emphasise on his nomination and subsequent installation this year.

He commended those at the reunion and urged others who could not make it to try and come around another time in order to foster unity amongst Asafoiatse Nettey descendants.