Not a disgraceful campaign 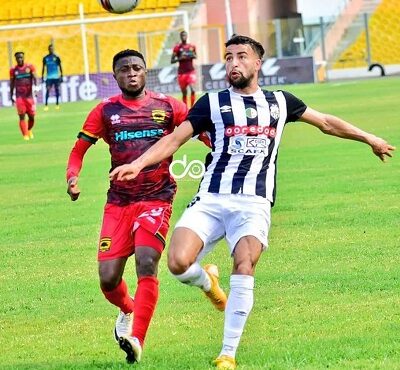 BRIGHT-EYED and bushy-tailed, they stormed Algeria under some contentious circumstances, with only a handful predicting something good could emerge from the potentially harrowing trip.

That was the impression emblazoned on the minds of thousands of Ghanaians – even including dyed-in-the-wool Kotoko faithful when the Asanteman club stormed Algeria for their return fixture against ES Setif.

Fact is that, Kotoko did not succeed in the northern African adventure by way of qualification into the group stage of the CAF Confederation Cup competition. It was always going to be a Himalayan undertaking. We all knew that after they slumped 1-2 in the opening leg at the Accra Sports Stadium, a week earlier.

But in spite of the grueling challenges they encountered with regard to the trip that saw them arrive in Algiers less than 24 hours to the game, Kotoko plundered into the evening full-of-beans  – and bravely battled the Algerian league leaders to a nail-biting barren scoreline.

Reports suggested that the Ghanaians even blew a couple of swash-buckling opportunities which, if exploited, would have sent the cavilers running for cover.

Indeed, Kotoko may have been out; but they were not a busted flush! They were good exponents of the game and were not embarrassed.

Credit to the team for returning with heads held high, but more important, chieftains of the Asanteman contingent must sit up and see how best they can build from the Algerian debacle. Truth is, the performance of the club – even in the Accra defeat, was commendably stimulating.

They lost because they took their eyes off the ball after stealing the lead; very typical of Ghanaian teams.

What Kotoko need at the moment – just like Hearts of Oak, is a dose of unity, focus and sense of purpose dashing into the future.

Hearts recently lost the services of their Serbian coach Kosta Papic, who left the club in the lurch to join South African side Blackpool – citing managerial interference in his job.

Consequently, disgruntled supporters of the club flew into ‘tantrums’ and badgered on management as they demanded the dissolution of the Board among other proposed measures to put the Phobians back on track.

Matter-of-factly, Hearts have not clinched the Premier League diadem since the feat of 2008/09 season – but in their attempt to put things right, the supporters need to be very wary and not behave like a bull in a China shop.

Be that as it may, it is time for supporters of both Hearts and Kotoko to be careful not to blow their stack but put in positively far-reaching measures to help their club’s management teams to succeed.

That is the only way to break the back of the beast in the midst of the tempest!