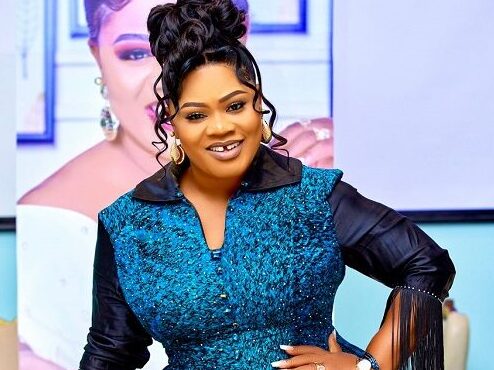 Ghanaian gospel gem Obaapa Christy has expressed her profound gratitude to God for the height she has attained in her music career.

According to her, she cames from a poor home and it never crossed her mind,  God will bring her this far.

The songstress revealed that her singing manifested during her basic school days.

Speaking at a press conference to launch the Obaapa @20 last Thursday, the musician noted that her only aim during her basic school days was for Friday to come for the then young Christiana Twene to be called to lead praise and worship.

“I was not academically good, but my only joy going to school was an opportunity to always lead praise and worship on Fridays,” she said.

Obaapa further noted that her musical journey went a notch higher when she joined Hallelujah voices which nurtured his craft .

To celebrate the goodness of God, Obaapa Christy together with her team has put together some activities to celebrate how far she has come with her music ministry.

She expressed appreciation to Osuani Afrifa for his immense contribution to her career since 2002, and over the two decades, she has released 12 albums and three singles.

Describing her success over the years, she said discipline, consistency, hard work and total reliance on God had been her secret to a brand which had gained great admiration.

Many lives and homes have been influenced positively by her music. With her life anchored on faith in God, Obaapa sees this celebration as a thanksgiving offering to God for fulfilling His promises to her.

For this reason, Obaapa entreats all stakeholders in the entertainment industry, organisations, family, friends and fans to collaborate and support her raise an altar of thanksgiving to the Lord.

There will be some fans interaction and humanitarian activities by Obaapa Christy Foundation that will precede the main event donation to some orphanages and visit some market places.

These activities would be crowned with a huge concert on September 4, 2022.