Office of the Speaker writes to The Spectator, saying: George Frank Asmah’s aspersions on Speaker exposes his ignorance 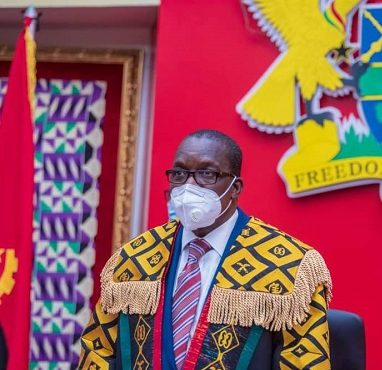 It is a known fact that Mr. John Boadu, in the heat of the 2020 elections, made a categorical statement which was captured on video and has since been trending allover the internet saying that President Akuffo Addo had won the Presidential elections but the NPP lost the parliamentary elections to the NDC.

The Speaker only re-echoed what Mr. Boadu said on tape but strangely, the only one who didnot hear that was Mr.George Frank Asmah.It is important to state however that before I made this decision to write this rejoinder, I called Mr.George Frank Asmah to enquire from him if he had watched the video or seen a transcription of it and his answer was a definite No.He had not seen the video: he only heard Mr. Boadu deny ever voicing out those words attributed to him and decided to launch his attack.

In the writeup, he stated, and I quote; “Rt. Hon. Bagbin: you are known as a very competent lawyer. Not so? In the ‘game of law’ is it not the case that EVIDENCE is supreme? So where is the evidence that what you told the Ethiopian Parliamentary delegation actually happened?”

I get the impression from the above quote that my senior,George Frank Asmah, has forgotten that it is not only in the “game of law” that EVIDENCE becomes supreme. Even as journalists, we are required by our code of ethics to ensure fairness, equity, balance and establish the truthin what we write. The evidence Mr.George Frank Asmah is looking for is allover the place and in every newsroom. There can only be one conclusion to draw from this behavior and that is mischief or a crave to use his column in The Spectator newspaper to court the attention of whoever will get him appointed into political office.

One can understand the frustrations of Mr. George Frank Asmah, who in 2005 was lifted from the newsroom of the New Times Corporation to become District Chief Executive of the Komenda-Edna-Eguafo-Abirem (KEEA) District Assembly under the NPP administration. This has been the NPP’s way of encouraging journalists like George Frank Asmah to be wayward and unprofessional against the opposition and in turn, they get rewarded with juicy appointments. There is a plethora of such journalists around today on different appointments.

George Frank Asmah’s frustration is a result of waiting in vain over the years for another juicy appointment which has since eluded him.So in his imagination, Mr.George Frank Asmah thinks he can now court the attention of the appointing authority by defending leading members of the ruling party, in this case, the dishonest and devious behavior of Mr. John Boadu, General Secretary of the New Patriotic Party(NPP), to court attention.

Even before his election into the high office of the Speaker of Parliament, Rt. Hon. Bagbin had committed himself to the cause of the nation building and has exhibited high moral integrity at all material times.It is with this same standard that Mr. Speaker spoke to the Ethiopian Parliamentary Delegation when they paid a courtesy call on him in his office. He spoke from the perspective of many issues known to him and it was with this conviction that he admonished the Ethiopian delegation to emulate only the good sides of Ghana’s democracy.

I have no doubt about the unwavering devotion of the Speaker to the collective cause of building a prosperous nation. He has no intention whatsoever to do anything that will jeopardize the successes that this country has achieved so far.Perhaps my little advice to George Frank, who wants to use this antiquated style of directing attention or traffic to himself for political position, to use his energy, time and column provided for him to tout his legacy for the people of KEEA during his stewardship as District Chief Executive.

How many lives did he transform with his leadership in KEEA? What impact did he make? I believe if he is able to do this honestly and effectively, he would not need to destroy the reputations of others or be seen hopping or jumping to defend dishonest men whose words do not mean anything to them and who cannot defend their own words when it is played back to them.

I will come back and discuss the extreme trauma that the chiefs and people of KEEA have been made to suffer following the refusal of the powers that be to put to use the Komenda Sugar Factory which was commissioned in 2016 by the government at the time.This facility was built from loans that would be serviced with tax payers’ money and one would have expected people who claim to hail from the area where it is built to join calls for it to start operations, to produce the sugar for which it was built, and not bad mouth it or sit aloof. That should be your focus, George Frank!

Office of the Speaker