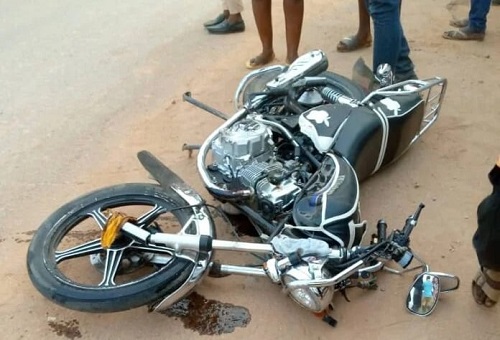 The world is full of uncer­tainties but if only one knew the outcome of his or her actions whether good or bad the status quo would be different.

An incident which hap­pened on Tuesday around 8:30 am on the Achimota Neoplan high way fit the above de­scription.

An okada rider who tried in a good deed to swerve hitting a runaway ‘indomie thief’ is fighting for his life at the hospital.

The Spectator witnessed the unfortunate incident which happened in a snap but left the rider severely injured.

The okada rider who was heading towards Accra from the Nsawam road saw a man ‘carelessly’ crossing the road, so he tried to avoid crashing into the man but rather hit a pavement on the highway.

Unknown to people at the scene of the crash, the man believed to be in his late twenties was running from be­ing lynched by an approaching angry mob.

The man had allegedly stolen from an indomie seller close by and took to his heels after the woman raised the alarm.

Police patrol on the Achimota Neoplan highway quickly rushed to the scene and conveyed the severely in­jured okada rider to the hos­pital whilst the thief landed in the grips of the police.