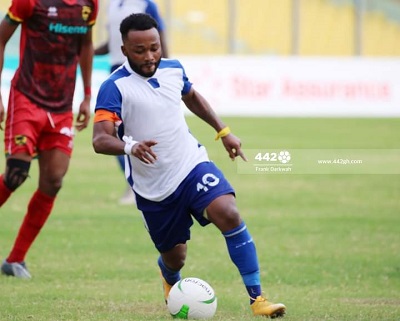 The thrilling Ghana Premier League (GPL) resumes with week-eight fixtures at the various centres, and splashed with good news for the famished fans.

On Tuesday, the government announced the lifting of a ban imposed on football fans since March last year to attend games, due to COVID-19 concerns.

Though the various venues will admit only 25 per cent of fans, the move by the government to allow fans back into the stadium will still be much treasured by the clubs as they continue to incur huge costs as a result of games being played behind closed doors.

The pick of the week incontestably will be the cagey game between impressive Great Olympics who lie sixth on the ladder on 11 points and fourth-placed AshantiGold slated for the Accra Sports Stadium tomorrow, with about 9,000 fans expected to attend. The Miners are only a point better than the Dade boys.

As usual, the Oly boys will rely heavily on skipper Gladson Awako to inspire them to victory in a game expected to produce pure fireworks and should put fans of the two teams on nerves.

Yet another huge fixture will be contested between Elmina Sharks and in-form Hearts of Oak at the Ndoum Sports Stadium in Elmina. The Phobians last weekend put up a sparkling performance to inflict a crushing 6-1 win over a hitherto unbeaten Bechem United at the Accra Sports Stadium. That inspiring victory could galvanise the away team to another great result, though it looks a very tall order for them.

In other potentially stirring games, wounded joint leaders – Bechem United, will welcome King Faisal to Bechem tomorrow, hoping to restore the smiles on the faces of their fans.

Eleven Wonders will sit at the comfort of home on Sunday to welcome stubborn Karela United in a tie that could go either way though a stalemate looks more likely.

Berekum Chelsea look the favourites to scoop all maximum points as they welcome Inter Allies to the Golden City Park tomorrow; but Aduana Stars should this afternoon pose some tough challenge to hosts Medeama SC whose attack will be bolstered by the signing of former Asante Kotoko Burkinabe forward Ahmed Toure on a  two-year deal.

Sadly, Toure can only start his Medeama career next month when the second transfer window is opened.

At the Theatre of Dreams in Dawu tomorrow, Dreams FC are tipped to go past traveling Ebusua Dwarfs, but that result would not come home easy at all.

The tie between Asante Kotoko and Liberty Professionals at the Accra Sports Stadium will take place on Monday at 3.pm.

As of press time yesterday, struggling Legon Cities were slotting it out with WAFA, hoping to snatch their first win of the eight-week campaign.