One year-old baby, 2 adults killed in gory accident … 11 others injured 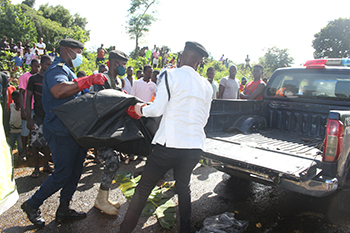 A year-old baby and two male adults were killed, while 11 others suffered injuries in an accident, at Anoff near Nsawam in the Eastern Region, on Tuesday.

The accident brought a large crowd to the scene, who wanted to catch a glimpse of the incident, and were not wearing masks or adhering to social distancing directives.

In an interview a survivor of the accident, who pleaded anonymity, said the vehicle with number GT 5747-19 was moving from Michel Camp in the Kpone Katamaso District, to Oda in the Eastern Region, while the truck was from Nsawam direction to Adeiso.

She said the Urvan vehicle burst it tyre and crashed into the truck resulting in the death and injuries of the occupants in the car and that of the Urvan.

Another eyewitness said the residents who heard of the crash of the vehicles, proceeded to the scene to help rescue the victims to the hospital.

The Nsawam District Police Commander, Superintendent of Police (Supt) Marian Adu-Owusu, who confirmed the tragedy to the Ghanaian Times, here, yesterday, said the police went to the accident scene to help rescue the injured and ensure free flow of traffic.

He said the bodies have been taken to the Nsawam Government Hospital morgue whilst efforts were being made to trace relations of the deceased.

The police commander said three others who were in critical condition, were transferred to the Korle Bu Teaching Hospital, and investigation into the cause of the accident was ongoing.