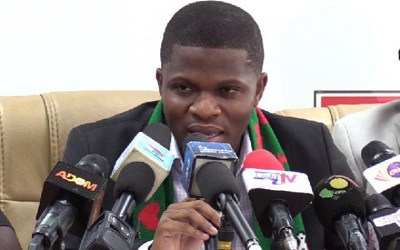 The National Democratic Congress (NDC) has observed that the outcome of the New Patriotic Party’s (NPP’s) parliamentary primaries over the weekend was as a result of the non performance of the government.

At the polls in 101 constituencies, 40 sitting Members of Parliament including 11 parliamentary committee chairmen, four vice chairmen, two regional ministers, a minister of state and three deputy ministers of state all lost their seats to their contenders.

Addressing the media in Accra yesterday, Sammy Gyamfi, the Communications Officer of the NDC said the decision of the NPP delegates was an invitation to the larger Ghanaian voter to show the government the exit in the December polls.

“The results that emerged from the NPP primaries reflect the dissatisfaction of NPP supporters and Ghanaians at large with the abysmal performance of the Akufo-Addo government.

“The defeat of so many incumbent Members of Parliament especially those in parliamentary leadership and government shows that the NPP delegates voted for change and passed an overwhelming vote of no confidence in their own government,” Mr Gyamfi said.

According to him, the opposition party’s checks have revealed that many first-time MPs lost their seats because no developmental projects have been undertaken in their constituencies in the last three and half years.

“The one million dollar per constituency which were promised has become a pipe dream. So these first-time MPs could not undertake any significant developmental projects in their constituencies for the benefit of their constituents,” he added.

He said the MPs Common Fund which fills in for government shortfalls in the local area has been in arrears for more than two quarters.

“So the non-performance of the Akufo-Addo government is what affected most of these first-time incumbent MPs per our checks and that is a testament to the monumental failure of President Akufo-Addo and his government.”

On the defiance of Covid-19 preventive protocols during the primaries, Sammy Gyamfi said it was sad, cruel and reprehensible for President Akufo-Addo who promulgated the law that has led to arrest, prosecution and imprisonment of pastors and other Ghanaians to turn around and supervise the violation of same by his party folks and officials with impunity.

“This is unacceptable and abominable particularly at a time church and mosque gatherings have been restricted to not more than 100 attendees and duration of one hour and at a time Ghanaians who have been found of not wearing face masks are being subjected to all manner of degrading and inhumane treatments.

“The recklessness and the lawlessness displayed by the NPP during their primaries coupled with the selective application of the law on Covid-19 preventive protocols by our law enforcement agents make the imprisonment of Ghanaians who were convicted for breeching public gathering restrictions under EI 64 is totally unjustifiable and unfair.

“People have gone to jail for this and we believe that we must all hold President Akufo-Addo to these same standards; either than that, then we have no business imprisoning people in this country.

“We must as well release the pastors and citizens who have been imprisoned as a result of the enforcement of this very law because nobody is above the law in this country.”