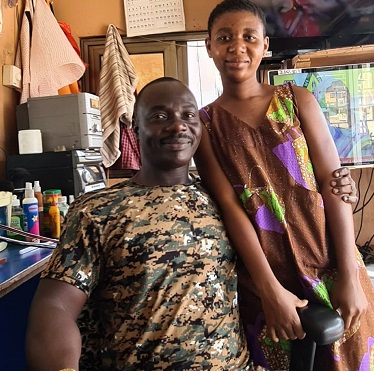 An 18-year-old hearing impaired student, Ms. Tabitha Abed has advised parents to engage the services of Sign Language Interpreters to facilitate effective communication between them (parents) and their children with hearing challenges.

Her advice followed her experience of constant struggle with her father when it came to taking major decisions concerning her.

It is recalled that on page 5 of June 26, 2021, edition of The Spectator, a story was carried under the headline “physically- challenged father recounts experience of raising disabled child” which talked about the frustrations of a father who among others, struggled to communicate with her daughter.

Tabitha stated that on a number of occasions she and her father had been able to make a headway in critical decisions concerning her welfare only when a  Volunteer Sign Language Interpreter, Mr. Dennis Asamoah, had been called upon to listen to both sides and carry each other’s concerns for easy understanding.

Speaking through the interpreter she told this reporter that before this term started, there had been back and forth about why she was unwilling to go back to school and every effort to get her father, Mr. Abed to understand her concerns at school had proved futile.

She said she had not been impressed with her academic performances for a while and was really disturbed and even feared she could fail her exams going forward hence her decision not to go back to school and thought this would save time, energy and even money her father who is a barber had to spend on her education.

The student was happy that Mr. Asamoah saved the day by facilitating effective communication between her and the father and, therefore, recommended that many parents should employ the services of experts in Sign Language so that they could better understand their children especially when it came to education and general welfare issues.

Interestingly, she said that she was not worried speaking to her father through an interpreter but rather found this more convenient because it saved both of them the stress and struggles of having to put their emotions and desires across without creating the impression that she was being disrespectful to her father.