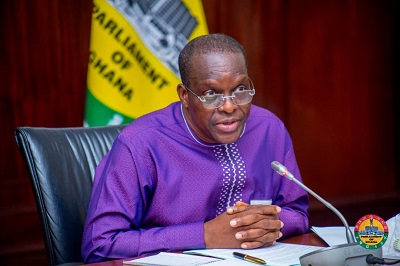 Readers, last Saturday, my column did not appear so as to make way for a rejoinder to my article in the Saturday, August 28, 2021 edition of The Spectator.

The rejoinder from the Office of the Speaker of Parliament was headlined: ‘George Frank Asmah’s aspersions on Speaker expose his ignorance.’

The rejoinder was authored by Mr Peter Bampoe who claims to be Communications Officer at the Office of the Speaker of Parliament.

The fact of the matter is that the rejoinder woefully failed or refused to respond to the SPECIFIC ISSUES I raised in my article and instead; attacked my personality and the personality of the General Secretary of the New Patriotic Party, Mr John Boadu.

Readers, in my article, I highlighted SPECIFIC STATEMENTS reportedly made by our Rt. Honourable Speaker of Parliament, Mr Alban Sumana Kingsford Bagbin, on alleged snatching of parliamentary seats by the NPP to gain Majority in Parliament, when the Ethiopian parliamentary delegation called on him.

I then drew inferences to conclude that our venerable Speaker told a ‘red’ lie to the Ethiopian delegation that called on him, on his claim about NPP snatching parliamentary seats to get Majority in Parliament. The simple reason is that our Speaker of Parliament has no evidence to support such a ‘red’ lie.

Indeed, the ‘red’ lie of Mr Bagbin on NPP snatching parliamentary seats to gain Majority in Parliament has even been ‘magnified’ and ‘exposed’ the more, by the rejoinder authored by Mr Peter Bampoe.

This is because the rejoinder could not provide any evidence from the Speaker’s Office to support the statement made by the Speaker.

Indeed, the author of the rejoinder, Peter Bampoe, called me on phone, introducing himself as speaking from the Office of the Speaker. He then asked: “Have you seen the video of the NPP General Secretary, speaking on snatching of parliamentary seats?”

I said, “no”. Then he said he would send me a copy for me to see it myself.

He added that, “even that part of the video capturing the NPP General Secretary saying, some parliamentary seats were snatched had been erased.” Readers, I am yet to receive the video he said he would send to me.

I asked Mr Peter Bampoe: “Is the video you are talking about the evidence of Mr Speaker?

“And apart from that, has Mr Speaker got any evidence to support the statement he made to the effect that the NPP snatched some seats to get Majority seats in Parliament?”

Peter Bampoe’s answer was: “You see, some of these things, it is very difficult to get evidence but it really happened.”

So, readers; I knew as an indisputable fact that Mr Bagbin has no evidence under the SUN, MOON and STARS to support his statement that: “But for last-minute movements where some parliamentary seats were snatched by the NPP, the NDC would have had Majority in Parliament.”

And truly, I was not disappointed by the shabby rejoinder. That is; leaving the issues raised in my article and attacking my personality. A really “political-generated propaganda.”

What were the issues I raised in my article?

I stated that the Speaker of Parliament in a recent interaction with a delegation from the Ethiopian Parliament is reported to have said; “but for last-minute movements where some parliamentary seats were snatched by the NPP, the NDC would have had Majority in Parliament.”

After making such a statement, the venerable Speaker seemingly chose the NPP General Secretary as his ‘witness’. Let us read what he said.

Reportedly, Rt. Honourable Bagbin said: “The NPP General Secretary, Mr John Boadu, even admitted that the NDC won more seats in Parliament, but some last-minute moves were made to snatch some of the seats from the NDC.”

Rt. Honourable Bagbin reportedly added: “That one is a statement of fact.”

I wrote: Expectedly, the NPP General Secretary described the claim by Rt. Honourable Bagbin that parliamentary majority went in favour of the Opposition NDC as “falsehood”.

Mr Boadu said : “There is no iota of truth in such statement made by Rt. Honourable Bagbin to the Ethiopian Parliament since I have never stated anywhere that the NPP devised tactics to get parliamentary majority in its favour.”

He insisted that; “the NPP has always maintained in its post-elections comments that our party won majority of the parliamentary seats.”

And the question I asked in my article was : “Has Mr Bagbin himself got water-tight evidence to back what he allegedly told the Ethiopian parliamentary delegation?” This question was not answered by Peter Bampoe’s rejoinder.

Another question I asked in my article was:”Assuming the NPP General Secretary said exactly what Mr Speaker is quoting him to have said; does it make his statement true?” This question was also not answered by Peter Bampoe’s rejoinder.

Yet again a question I asked in my article was: “Where is the evidence to justify that the so-called statement made by the NPP General Secretary is nothing but the truth?” This question was also not answered by Peter Bampoe’s rejoinder.

Readers, again I asked; “Rt. Honourable Bagbin: You are known as a very competent lawyer. Not so? In the ‘game of law’ is it not the case that EVIDENCE is supreme?

“So, where is the evidence that what you told the Ethiopian parliamentary delegation actually happened?” This question too was not answered by Peter Bampoe’s rejoinder.

Readers, the venerable Speaker’s Office is a ‘hallowed’ Office which must be protected and respected by all Ghanaians. But the Speaker is a human so if he errs he must admit and apologise and we move on as a ‘growing’ democratic state.

Mr Bagbin must always understand the circumstances for which he was ‘elected’ or ‘appointed’ the Speaker of Ghana’s Parliament.

Having made such ‘rich democratic history’, all eyes across the world are now intently focused on him and his venerable Office.

Consquently, Mr Bagbin’s acts and deeds; particularly his utterances, will be scrutinised by the media, the academia and democratic institutions across the world.

There is no doubt in the minds of many Ghanaians that Mr Bagbin is a politician with a ‘ fabulous experience’. But for me, his office must engage very competent; level-headed and ‘tried and tested’ communications team, with practical ‘intellectual fire-power’ to analyse, review, write and communicate effectively and efficiently.

Mr Speaker must not allow his Office to be turned into NDC propaganda machinery. Otherwise, history will not be kind at all to his record in that venerable Office.

For me , critical analysis of the content of the rejoinder to my article, speaks VOLUMES about the people ‘clothing’ themselves as ‘Communications Officers’ at the Office of the Speaker !!!

Was Professor Edward Gyampo also casting aspersions on Mr Bagbin when he said:” Bagbin is expected to be very firm and neutral person who will not even do the bidding of his own party and he sounded that caution.

“And if he begins to make such statements not backed by evidence, you open yourself up for needless criticisms.

“They went to court. If they had that evidence they should have shown this there.

“For a whole Speaker to be saying this; is a bit problematic because if you do that, it undermines the expected neutrality.”

And by his comments, was Professor Gyampo also looking for a “juicy” political position in the NPP government?