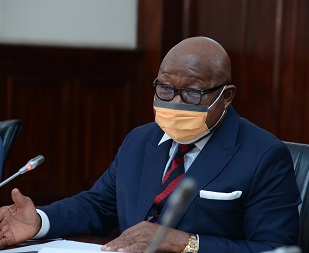 Parliament has rubbished reports making the rounds that two members of the House and 13 Parliamentary Service staff have tested positive for coronavirus.

News portal, Starrfm.com.gh yesterday reported that the lawmakers and staff of Parliament had tested positive for the disease.

But in a press statement issued in Accra yesterday and signed by Director of Public Affairs, Madam Kate Addo, Parliament said the reports were false.

“Parliament would like to state categorically that the results of the tests are not yet known and so the report by Starrfmonline is not true.

“Parliament would therefore like to urge Starrfmonline to withdraw the said report and update its audience with the relevant information to the effect that the results from the tests are unknown to Parliament,” the statement said.

It continued: “The confidentiality protocol is that, those who test positive will be called directly by the testing team. Officially, Parliament is unaware of any such call and therefore there hasn’t been any official figures given by the National COVID-19 response team.”

The statement said Parliament remained committed to ensuring the safety and avoidance of possible spread of the disease in the House.

“Citizens are encouraged to call or reach Parliament online with their enquiries and only attend upon the House if it becomes absolutely necessary,” the statement directed.

“What we would want you to know is that there is no truth in that [report].

What that media house did amounts to nothing but speculation. They are only speculating that two Members of Parliament have tested positive. It is speculative journalism,” he emphasised.

The Speaker of Parliament, Prof. Aaron Mike Oquaye during proceedings however, directed that all MPs, staff and members of the Press Corps who hadn’t undergone the test should do so on Thursday and Friday to avoid sanctions.

“The decision is that in our collective interest, it is mandatory. Don’t wait till it gets to the stage of applying sanctions,” Speaker Oquaye said.

Speaker Oquaye said elaborate steps were being taken to ensure the observation of all appropriate protocols in the light of the results.

“Absolute confidentiality and professionalism [will be used] in handling all cases be it negative or positive,” he assured.

On the authority of the Parliamentary Service Board, Speaker Oquaye at the commencement of this meeting on Tuesday, May 19, directed that persons who worked within the prescient of Parliament undergo testing for the virus.

So far, 690 persons including MPs, staff and members of the Parliamentary Press Corps had undergone the test.