Pay us compensation for taking our lands – Weija Chiefs 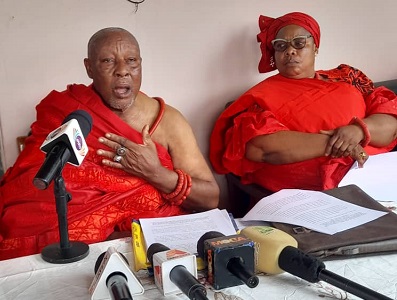 The traditional authority at Weija in the Greater Accra Region has appealed to President Akufo-Addo to as matter of urgency pay the compensation for their lands government acquired since independence.

The traditional leadership again asked the government to release portions of over 13,000 acre lands outside the buffer zone of the Weija water headworks to them for development since the town was currently overpopulated.

Ogbedada Boafo Danyina-Nse I, the Dzaasetse of Weija addressing the media on Wednesday on the issue of the acquisitions, said apart from the compensation of £5,000 paid to Nii Kojo Ababio IV, and then Chief of James Town for acquisition of 4,550 acres of land to develop Weija, no compensation had been paid for subsequent acquisitions.

He said that from 1959 to 1996 governments’ had acquired a total of 15,005.65 acres and an additional 28.56sqml lands from them for various national developments projects without any form of compensation.

“In all these acquisitions,we are yet to receive compensation in that respect and after 44 years, successive governments have still not kept faith with us,” he told the media at Weija,

The Dzaasetse said persistent delay in the payment of compensation due them by the government continued to affect the community which population has grown to the extent that there was the need for infrastructural development to meet the ever increasing demand of the indigenes.

Ogbedada Danyina-Nsre, therefore, asked government to ensure that the compensation was paid to the rightful landowners since other mischievous persons were parading as beneficiaries of the compensations.

On the issue of releasing some of the lands which have not been put to use he said this was based on the fact that the town had grown to the extent that there was the need for expansion saying” these acquisitions have made the indigenes squatters in their own God-given land.”