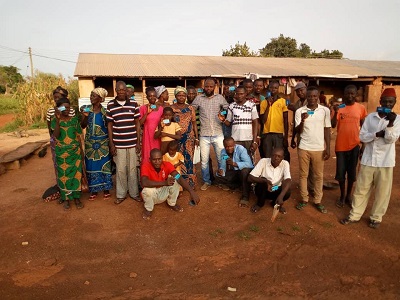 A philanthropist, Mr Mickydary Yakubu has financed over 700 Ghanaians to obtain the National Health Insurance  Scheme (NHIS) card at a total cost of GHC 28.320.00.

The cost included the registration fee, transportation fare from their localities to where the  NHIS cards were issued, and hotel accommodation.

The beneficiaries are from Jamasi in the Ashanti Region, Zaagum, Yuga, Yakura, in the North East Region, and Douri in the Upper East Region respectively.

Mr Mickydary Yakubu who is also the Founder of Maloa Foundation, Ghana, a non-governmental organisation  (NGO), which assisted  the poor people during the  COVID-19 lock down, said he was moved to go to the aid of  people who were living in poverty and could not afford the cost involved to obtain the NHIS card.

He said despite its immense benefits, there were many  people who could not afford the means to obtain the NHIS card.

Mr Yakubu explained that since the NHIS issuing centres were not located in the towns where the beneficiaries lived, it became difficult for these people  who were mostly peasant farmers to obtain the card from their own resources.

He said, ” I always want to put smiles on the faces of people who naturally  would  not  have the means to repay for the services received.”

Mr Yakubu said there was nothing more refreshing than to reach out to the less privileged  in society.

He said people should not  be self-centered, but try to think about the welfare of others in dire need of vital support to make life more meaningful.

Mr Yakubu said he started the project to prepare NHIS cards for people in 2016 and was still poised  to continue to lend his support to the vulnerable.

He intimated that he had planned a mammoth blood donation exercise to be held at Hohoe in the Volta Region to  support the National Blood Bank.

Mr Yakubu said his objective was to help cultivate the habit in the citizens to willingly donate blood to save lives.