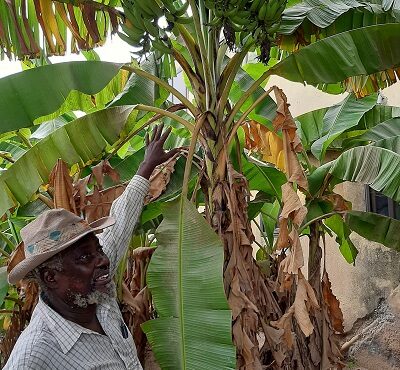 This wonder plantain with three bunches, has continued to draw crowds into the house of 76 year old man, Nii Odai Koranteng at Kaiser Valley near Dome, in Accra.

The “three headed” plantain, originally started with two bunches some few years ago in the garden of the old man

He told The Spectator in an interview that, he believed the plantain was a  gift from God, for his transcendental meditations on topical issues.

The old man is therefore appealing to the scientific community in Ghana, to explain this rare phenomenon to the general public, if they don’t believe it is the handiwork of God.

Nii Odai Koranteng has appealed to the minister of Agriculture Dr.Owusu Afriyie Akoto to pay a visit to the place with agric officers to evaluate the wonder plantain.