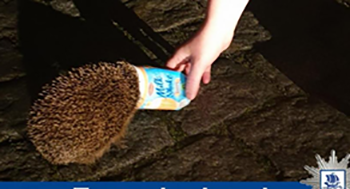 Police in Germany shared a photo on the rescue of a hungry hedgehog that got its head stuck in a discarded milkshake cup.

Bremerhaven police said officers found the hedgehog struggling to free itself from the cup in the middle of a road.

Police said the hedgehog was apparently drawn to the smell of what was left in the banana-flavored milkshake cup after it was discarded.

Officers were able to pull the cup off the animal’s head and the hedgehog was released into a nearby meadow. https://www.upi.com/