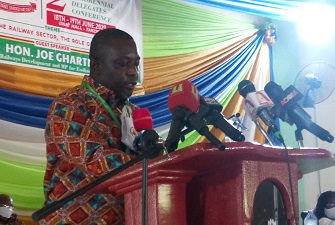 He believed the trend, over the years had been one major factor which had affected the development and fortunes of railway subsector of the economy of Ghana.

Mr Ntarmah expressed these concerns at the second quadrennial delegate conference of the GRWU which ended at Fijai, in Takoradi, on Friday on the theme ‘Revamping the railway sector, the role of stakeholders’.

“It is important to state that in the past, unnecessary political interference and influence did not allow potential investors to succeed in the quest to revamp the railway sector.” he stressed.

The GRWU Secretary General declared: “The ongoing construction of the Akosombo to Mpakadan railway line has really raised the appetite of Ghanaians for more railway construction and we cannot afford to fail them.”

Mr Ntarmah told the conference that another major challenge facing the railway industry was the view held by most railway workers and observers that owners of the bulk road vehicles and the very influential in the society were“behind the non-revamping of the Western Railway line to Awaso.”

He said, such observers wondered why there was no contract for the revamping to reach Awaso, especially when the current government had shown the commitment to revamp the railway sector.

“The benefits that the nation will get by hauling bauxite and other minerals by rail far outweigh the benefits any individual will get. It is our belief that in the not too distant future our cry to get to Awaso will receive the needed response it deserves for us to have our jobs secured.” Ntarmah mentioned.

He reported that from December 2019 to April 2020, Ghana Manganese Company’s decision to stop the haulage manganese to Takoradi Port, had affected the operations of GRCL which now rely on Central Government for total payment of salaries of railway workers.

The General Secretary indicated that the situation could have been avoided if the GRCL had diversified its operation to include the haulage of bauxite and cocoa.

Mr Ntarmah, however, noted some positive interventions including the rehabilitation of the existing narrow-gauge line from Kojokrom to Tarkwa that has ensured resumption of passenger services, rehabilitation of the existing narrow gauge from Accra to Nsawam and the award of contract to M/S AMANDI for the construction of standard gauge railway line from Kojokrom to Huni Valley.