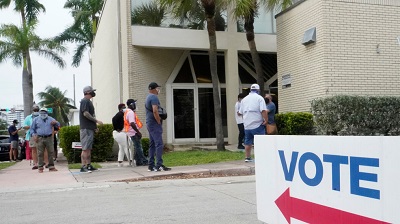 A pregnant Florida woman didn’t let labour stop her from casting her vote in the presidential election, refusing to go to the hospital until she filled out her ballot.

Officials with the Orange County Supervisor of Elections said the woman was already in labour when she arrived at the polling site with her husband, according to news reports.

Elections employee Karen Briceño González said the husband asked for a ballot for his wife and later told the staff that she was in the car, in labour and refusing to go to the hospital until she was able to vote.

Ms González said she rushed outside to give the woman her ballot and check her ID. The staffer thought the woman would fill it out later, but the woman filled the ballot out right away.

Elections clerk Eileen Deliz said the couple never mentioned why the woman waited until she was in labour to cast her vote.

Deliz said the unexpected incident delivered a bunch of smiles to the election workers.

“We are very, very busy, but when something like that happens it just makes our day, every election cycle brings us a great little story, Deliz added.”

Officials said the woman’s husband later drove her to an Orlando hospital.