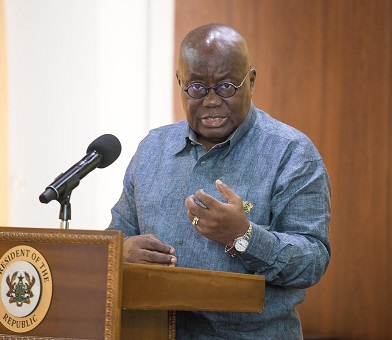 Former President John Agyekum Kufuor has commended President Nana Addo Dankwa Akufo-Addo and his government for delivering on the promises they made to Ghanaians in the run up to the 2016 elections.

He said the President deserved commendation for delivering on most of his promises to Ghanaians and thanked the entire membership of the New Patriotic Party (NPP) for working tirelessly to support the government.

Speaking at an acclamation ceremony for President Akufo-Addo as the presidential candidate of the NPP in the 2020 elections, former President Kufuor said the President and his vice, Dr Mahamudu Bawumia deserves high marks of success in political leadership.

“The hallmark of our president [Akufo-Addo] and his vice [Bawumia], truly is beautifully articulated leadership.”

“I believe in just a period of about three and a half years, they’ve shown vision, they’ve displayed strategy.

“Initially, even some of us said they were promising too much for a four-year term in office but within three and half years see what they have done,” he said.

“I wouldn’t say we are perfect, no, I don’t believe perfection in humanity, I don’t subscribe to that but even as I admit we are not perfect, I tell you, we have greats…,” he added.

Dr Bawumia said he was honoured by his historic fourth successive nomination as running mate by President Akufo-Addo.

“I thank the Almighty Allah for this historic day. I want to express my profound gratitude and appreciation to H.E. the President, Nana Addo Dankwa Akufo-Addo, for the honour of reaching out again to select me for the fourth time to serve as his running mate, and Insha-Allah, again as his Vice-President of the Republic, in his second term as President of the Republic,” said Dr. Bawumia in his acceptance speech.

“This day is historic because it has never happened in the history of our country that a Presidential candidate will select the same running mate four times in a row! The president selected me in 2008, 2012, 2016 and now in 2020!”

While expressing his utmost gratitude to President Akufo-Addo for the resolute confidence he has in him, Dr. Bawumia also extolled the leadership qualities of the President.

“Ladies and Gentlemen, this commitment tells you about the man Nana Addo Dankwa Akufo-Addo. He is a strong leader, a caring leader, a God-fearing leader, a trustworthy leader, and a consistent leader.”

“He could have easily dropped me in 2012 and 2016 but he stuck with me and I am so honoured that he did and so eternally grateful. I would never take the trust and loyalty he has reposed in me for granted and will continue to do everything in my capacity to support him in the execution of his mandate as President. Mr. President, it has been a privilege working for you all these years and I thank you for giving me the opportunity.  God Bless you.”