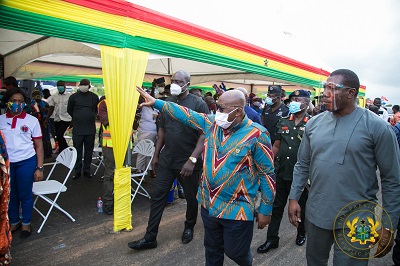 The President, Nana Addo Dankwa Akufo-Addo on Friday commissioned the Suhum Interchange and opened it to traffic.

The interchange, fully funded by the Government of Ghana consolidated fund, was part of the 31.7km Kwafokrom-Apedwa Junction Project.

It is one of the many projects along the Central corridor designated as National Route 6 (N 6) under the Ghana Highway Authority’s functional classification of road.

The project was executed by the Messrs China International Water and Electric Corporation (CWE) with Conptram Engineering Planning and Associates as the consultants.

The opening of the interchange which consisted of two bridges carrying a total of four lanes, with each of the bridges having 10 span reinforced concrete box grinder bridges with a total length of 250 metres, would provide safe and uninterrupted flow of traffic.

It would also facilitate trade between the northern and southern parts of the country and within the West African sub-region.

At a short ceremony to officially open the interchange to traffic, President Akufo-Addo explained that the project, which commenced in September 2008, was initially scheduled to be completed in March 2012.

However, it suffered several challenges mainly associated with payment delays, hence several suspension of the project by the contractor.

He revealed that work resumed in June 2017, on the south bound carriageway including the interchange after some negotiations and payments of arrears  were made to the contractor, while the northern bound carriageway including the construction of eight footbridges along the road corridor were all repackaged with work commencing in January 2019, adding that the entire Kwafokrom to Apedwa junction project would be finally expected to be completed in April 2021.

President Akufo-Addo noted “the commissioning was evident of government’s commitment to continue with and complete successfully major infrastructural projects we have inherited from previous governments so that the expected socio-economic benefits can be enjoyed by all”.

He stated that the interchange would alleviate the plight of the general public who use the Accra to Kumasi road and afford residents the comfort of going about their normal activities without fear of being knocked down by vehicles and hence urged motorists and road users to follow the traffic and control management schemes that has been deployed on the road to ensure safety for all.

“Indeed, the improved conditions of our highways owes a collective duty on us the citizenry to be mindful of our responsibilities on the road and I urge motorists to be extra careful on our highways and also resist the temptation of overspeeding on good road sections, adding that improved roads should not be a catalyst of national development nor instruments of death and pain.

He however expressed gratitude of the workers, security agencies, contractors, and the supervising agencies, the GHA for a good work done on the project.

For his part, the Minister for Roads and Highways, Mr Kwesi Amoako-Atta said the project generated thousands of jobs to a number of local companies, adding that the government was committed to completing many road projects.

He called on motorists to be mindful of their act on the road and charged the police to undertake speed checks regularly to ensure safety on the road.

The Project Manager of CWE, Du Huglai said they were committed to completing the entire project if they receive more funding from government.