Protests after Black man killed by police in Atlanta 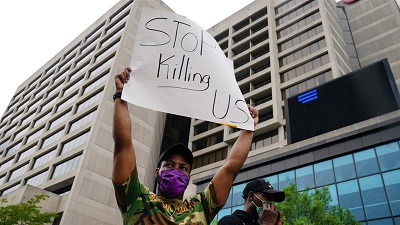 Demonstrators have taken to the streets in Atlanta in protest against the fatal shooting by police of a Black man who had fallen asleep in his car while waiting in line at a fast food drive-through south of downtown.

The Friday night incident comes at a time of heightened tension over police brutality and calls for reforms across the United States following the May 25 death of George Floyd in Minneapolis after a police officer kneeled on his neck for nearly nine minutes.

Police had been called on 27-year-old Rayshard Brooks for sleeping in a car blocking the drive-through lane of a Wendy’s restaurant on Friday night. After Brooks failed a field sobriety test, the officers attempted to place him into custody, according to the Georgia Bureau of Investigations (GBI), an independent agency that has been asked by the Atlanta Police Department to investigate the killing.

According to the GBI, Brooks resisted arrest and a struggle ensued, leading an officer to deploy a Taser.

When the Taser did not work, Brooks reportedly tried to take it from the officer. A second officer then tried to use a Taser on Brooks, but it had no effect, Atlanta Deputy Police Chief Timothy Peek told reporters after the incident. During the tussle, Brooks was shot and later died at a local hospital.

The GBI said in a statement it was investigating reports “that the male subject was shot by an officer in the struggle over the Taser”.

A crowd of demonstrators gathered at the scene of the shooting on Saturday.

The president of the Georgia NAACP, the Reverend James Woodall, has called for the firing of Atlanta Police Chief Erika Shields, according to the Atlanta Journal Constitution newspaper.

The GBI said it was reviewing video footage of the incident taken by witnesses. That video, which was posted on social media, shows Brooks on the ground outside his car, struggling with two police officers. The shooting later occurs out of frame.

Atlanta was among many large US cities where large crowds of protesters have taken to the streets in recent days.

Gerald Griggs, a lawyer and vice president of Atlanta’s NAACP chapter, estimated there were 150 people protesting at the scene as he walked with them on Saturday afternoon.

“The people are upset,” Griggs said. “They want to know why their dear brother Rayshard Brooks was shot and killed when he was merely asleep on the passenger side and not doing anything.”

Even though Brooks struggled with officers, Griggs said, “they could have used nonlethal force to take him down”.

Stacey Abrams, the Georgia Democrat who gained national prominence running for governor in 2018, tweeted on Saturday of the shooting that “sleeping in a drive-thru must not end in death”.

“The killing of #RayshardBrooks in Atlanta last night demands we severely restrict the use of deadly force,” Abrams’s tweet said. “Yes, investigations must be called for – but so too should accountability.”

The officers involved in the shooting were not immediately identified.