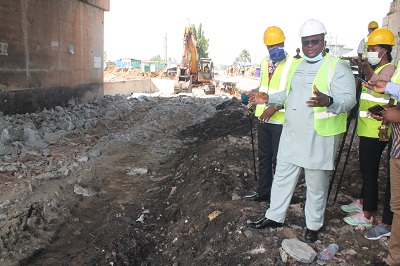 Following reports by the Ghanaian Times on the defective Achimota-Abofu stretch of the Odaw drain in Accra and its threats to adjoining structures, the Ministry of Railway Development has moved to safeguard rail tracks nearby.

The ministry is constructing a 50-metre retaining wall along the base of the Achimota under bridge to protect that section of the Accra-Nsawan railway from erosion caused by water from the drain.

Water from the dilapidated drain which passes beneath the bridge has veered into the embankment of the railway, eroding it and rendering the transport infrastructure dangerous.

The wall is being erected by the Ghana Railway Company Limited (GRCL) with large stones packed into metal mesh. It is also filling the eroded areas with similar stones.

During an inspection of the work yesterday,a Deputy Managing Director of the Ghana Railway Company Limited (GRCL), Dr Michael Adjei Anyetei said it would be completed next week.

He explained that the condition of the railway was not because the company did a shoddy job on the railway but as “result of a failed storm drain” adding that the water channel that retains the water should have been extended for free flow.

Beyond the work being done by the ministry, he called on the Ministry of Works and Housing to take immediate steps to address the defects of the bridge to prevent further damage.

“Even if you repair the rail track and the storm drain is not repaired it would be a recurring problem [in the area] and we will have to come and repair it,” Dr Anyetei explained.

Dr Anyetei who is in charge of engineering works, fell short of mentioning the cost of the retaining walls but did not deny that it was an additional cost to the state.

He said other parts of the railway system in Accra which were damaged by recent rains especially that of Tuesday dawn were also being rehabilitated by the company.

On the resumption of railway shuttle services, he said the sector ministry and other stakeholders were deliberating on the way forward because observing social distancing protocols in the trains would be expensive.

He served notice that structures of persons who had encroached areas near the tracks would be demolished soon after ongoing stakeholder consultation was completed.

In July Last year, Ghanaian Times reported that danger was looming at Abofu due to the dilapidated state of drain. The Hydrological Services Department promised to fix it early this year only to defer it to September this year.