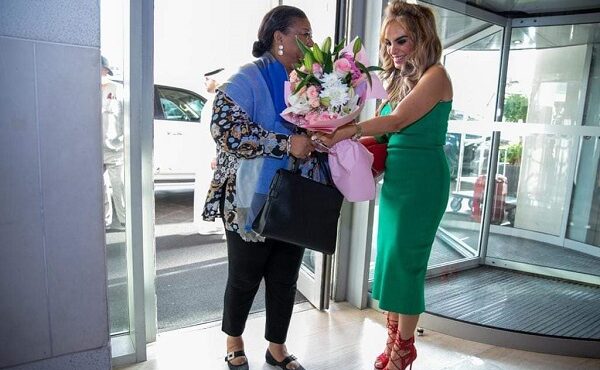 Asia Luminary on Tuesday. She was welcomed on arrival by the CEO of the Merck Foundation, Senator Dr.

The First Lady of Ghana, Rebecca Naa Okaikor Akufo-Addo, has assured Merck Foundation of her continuous commit­ment in her quest to change the status quo.

According to the First Lady, her Rebecca Foundation is committed to working together with Merck Foundation to make a difference in the lives of the people of Ghana.

Mrs Rebecca Akufo-Addo made this pledge during her address at the inaugural session of the 9th edition of Merck Foundation Africa Asia Luminary held on Tuesday, November 16 at Hilton Hotel in Dubai, United Arab Emirates.

She expressed appreciation to the gathering for their support and solidarity for making the 6th Merck Foundation Africa Asia Luminary hosted in Accra, Ghana in 2019 a success.

The First Lady of Ghana said the country’s partnership was launched in January 2019 and has since been a productive collaboration not only for her office but for society in general.

Mrs Akufo-Addo said growing up, she saw a gross injustice of women being tagged as infertile.

According to her, Merck Foundation’s support for infertility and other conditions in Ghana has been immense, adding that as a result, about 110 public sector healthcare providers have received specialists training.

This, she said, has resulted in improving equitable and quality healthcare solutions and praised the awards event which has so far rewarded about 100 Ghanaian journalists and musicians.

Mrs Akufo-Addo further noted that her Foun­dation and Merck Foundation would continue to inspire girl education through the ‘Educat­ing Linda’ initiative among other initiatives.

According to her, through this initiative about 20 highly performing but underprivileged girls have received scholarships with about 3,000 sets of schools supplies distributed to schools in Ghana and looking forward to launch additional five books to support the effort.

Mrs Akufo-Addo lauded Merck Foundation for its decision to support her “Because I want to be” mentor Initiative, which encourages girls to stay in school and support dropouts with skills training.

She established the Rebecca Foundation in 2017, with a focus on the wellbeing of Ghana­ian women and children in the areas of educa­tion, health and women’s economic empower­ment.

The Rebecca Foundation continues to be a major partner to the Ministry of Health in the provision of services to Ghanaians especially women and children.