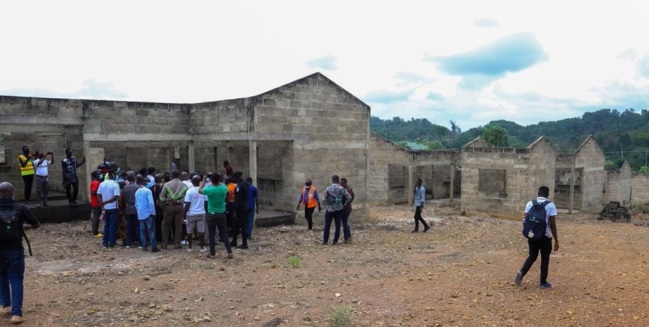 The Municipal Chief Executive (MCE) for Prestea Huni-Valley, Isaac Dasmani, says the reconstruction of the Appiatse community is progressing steadily.

According to him, geological works and assessments are currently ongoing to ensure some buildings are completed to provide shelter for the residents.

He made this known on Friday, March 11 after a burial service was held for six of the residents who died in the tragic explosion.

“We’ve put all of them to rest and a number of people came around to support. The reconstruction committee has been constituted and they have started all the geological works. All those who matter in the construction industry, their teams have been around.

“As I speak, a team from UMaT is on the field testing the soil and other important things that they need to do. We want to give the people a temporal shelter by roofing those uncompleted buildings.

“As we speak, 20 buildings are almost completed, very soon we’d put the roofs on top and then we’d share them for the people to stay in temporarily whilst the reconstruction people also do their work,” he told JoyNews in an interview.

Isaac Dasmani raised concerns over the payment of medical bills, stating that authorities will have to find a sustainable means of ensuring some of the victims continue to get medical attention.

“What is now worrying us is the hospitals they’re attending. Some of them are still going for reviews and when they come with some bills that we pay and all of that – that’s the challenge we are going through now,” he noted.

The explosion, which occurred on January 20, 2022, near Bogoso, claimed 13 lives leaving 59 others severely injured, including a 15-month-old baby.

According to the Police, the incident was due to a collision between a truck carrying mining explosives, a motorcycle and another vehicle resulting in the explosion.

The disaster displaced many after their homes were razed to the ground by the blast. Indeed, a whole community was destroyed.

The National Disaster Management Organisation (NADMO) and many Ghanaians after the incident provided relief items for the victims who have since been given a temporary shelter.

The government subsequently formed a committee to oversee the rebuilding of the community, which is currently ongoing.

overnment has also received a report from a committee formed to probe the circumstances leading to the disaster.

A support fund, Appiatse Support Fund, has been set up to receive donations and help rebuild the community. The Fund received its first donation of GH₵100,000 from President Akufo-Addo; other organisations have also donated to the Fund.

The Ministry of Lands and Natural Resources later fined Maxam Company Limited, the company responsible for transporting the explosives, an amount of $6 million.

President Akufo-Addo then directed that $5 million of the amount be donated to the Support Fund to rebuild the community.