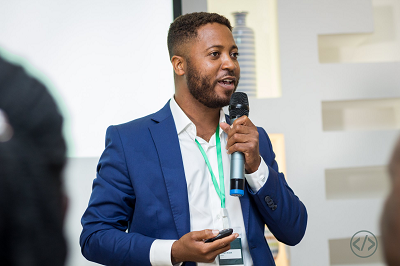 Mr Richard Brandt is the Chief Executive Officer of Codetrain, a software educational company which equips trainees with computer literacy skills, such as coding, to enable them offer solutions through web and mobile applications.

Since 2017, he has combined his teaching experience, software knowledge, and international exposure to positively impact hundreds of students who enroll on various programmes offered by the institution.

From humble beginnings and with limited resources, Richard is still determined to make Codetrain an “agent of enlightenment” to help young people tap the opportunities available in the digital space.

Although software development was not part of his initial career plan, the ‘techpreneur’ who hails from Osu in the Greater Accra Region said he always wanted to “improve things” hence his focus on projects that would lead to the advancement of society.

“While growing up, I used to accompany my father during polio immunisation in communities and that was when I realised the need to create more opportunities for the less privileged,” he told The Spectator during an interaction to find out more about him and his plans for the youth.

Richard studied General Science at Ghana Lebanon Islamic Secondary School in Accra before proceeding to Kwame Nkrumah University of Science and Technology (KNUST) where he graduated with Bachelor of Science (BSc) Mathematics in 2009.

With his arithmetic background, he was interested in the financial or insurance sector but that did not materialise. He progressed to achieve positive results from other opportunities that came his way and he has left a mark anywhere he has found himself.

“After completing school, my colleague and I had identified the falling standards in Mathematics results among BECE candidates within my area. Following the approval by school authorities, we decided to offer free Mathematics lessons for the pupils and that year they recorded high marks in the final exams,” he recalled.

The 31-year-old said his passion for Information Communication Techonology (ICT) was brought to the fore when he contributed to the establishment of an ICT department at the Ga East Municipal Assembly, as part of his National Service.

After the service, he joined Meltwater Entrepreneurial School of Technology (MEST) in 2010 where he studied software development and entrepreneurship.

During the two-year programme, he was part of a team that won the World Youth Summit Award for an innovation meant to address maternal mortality in developing countries.

A year later, he was selected among 100 best innovators worldwide for another eight-month programme called “Start Up Chile”, which trained entrepreneurs to advance their ICT skills and to start their own companies.

“During this period, I realised many people who joined the programme were no different from the young Ghanaians in my country. I realised there were young people in Ghana who could do same but did not have the needed opportunity,” Mr. Brandt noted.

The CEO said there was a high demand for software application developers in Chile therefore, upon his return to Ghana in 2015, he started a consulting company which connected young Ghanaians with software developers abroad.

“I took on interns and trained them. In 2017 I made a difficult decision to stop the consultancy and rather establish an institution to train young people to get better.

“It has been very challenging to start from the scratch without any support. Three years on, we have been able to train about 600 youth including some who had no prior knowledge in ICT,” he said.

According to him, though the institution was “doing a great job”, it took time to gain its reputation. A number of local and international students later became ambassadors of the institution.

“We don’t only train application developers but teach trainees critical thinking and all the skills that are required for them to make an impact in whichever organisation they find themselves,” he added.

In 2018, Codetrain enrolled on ‘Enpact Start Up’ mentoring programme which contributed to the restructuring of the institution. Apart from training sessions, the organisation hosts pep talks in secondary and tertiary institutions to whip up the interest of students in the use of modern technology tools.

The Technology enthusiast maintained that young people must be trained to “rise digitally” and become  global leaders who transform companies and society as a whole.

About two weeks ago, nine of his trainees came up with different applications aimed at dealing with the  challenges of COVID-19. Others, he said,  had also been absorbed by some local companies to provide tailored solutions.

“We have been able to prove that our concept works and we are hoping to train more young people in the years ahead. The future of Codetrain is to become an agent of development and make the youth ready for the future,” Mr. Brandt said.

Having started from an apartment, he currently has a team of 10 working at the Accra and Kumasi offices of the company and hopes to expand across the country and has called for partnership from public and private entities.

In 2019, Richard was listed among the top 50 Most Influential Young Ghanaians by Avance Media, a Public Relations and Rating firm. He was again adjudged ICT Entrepreneur of the Year 2019 at the YEIS 2019 Awards.