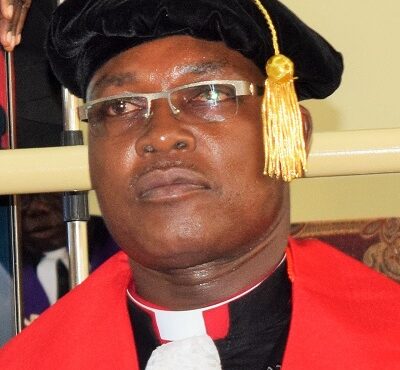 He drives as a hobby, plays table tennis as a pastime and loves writing as a leisure pursuit, but the strongest passion of the former farm labourer is to serve God and humanity.

Rt Rev. Dr Lt Colonel Bliss (rtd) Divine Agbeko assumed office as the new Moderator of the General Assembly of the Evangelical Presbyterian Church, Ghana (EPCG) after a festive induction service at the Dela Cathedral at Ho Kpodzi on Sunday.

The retired army officer was the immediate past District Pastor of the Accra New Town District of the church.

He was born in 1963 to Togbe Dzokoto IV, of Adaklu-Ahunda, who was the Senior Divisional Chief of Adaklu Traditional Area and Madam Florence Mercy Abra Gle from Gbi-Kpoeta, all in the Volta Region.

Rev. Dr Agbeko was ordained as a Minister of the EPCG on August 22, 1992 and commissioned as an officer of the Ghana Armed Forces on August 1999.

He entered the Trinity Theological Seminary at Legon where he earned a Diploma in Theology and a Certificate in Ministry.

In 1994, he was admitted to the University of Ghana, Legon where he was awarded Bachelor of Arts (Hons) Religions in 1998.

While serving in the Ghana Armed Forces, Rev. Dr Agbeko trained as a Career Chaplain at the US Army Chaplaincy School at Fort Jackson, Columbia, South Carolina and later earned a Doctorate Degree in Ministry from the Erskine Theological Seminary, Due West, in the United States.

He progressed to train as a Clinical Counsellor at the Self-Regional Hospital, Greenwood in the United States.

The versatile priest began his ministry as District Pastor at Mafi-Adidome in the Volta Region, where he served the church in that capacity from 1992 to 1994. He pastured the Abeka District of the EPCG in Accra from 1994 to 1998, and then worked as Chaplain at the Garrison Methodist Presbyterian Church (GMPC) at Burma Camp in Accra.

He enlisted into the officer corps of the Ghana Armed Forces and was commissioned on August 20, 1999, as a Lieutenant.

After commissioning, he continued to serve at the GMPC until September 2000, when he was assigned to the 6 Garrison Tamale (comprising 6 Battalion at Kamina Barracks, Airborne Force and the Airforce co-related at Bawah Barracks) as Chaplain.

In 2005, he was assigned the role of Administrative Officer at the Directorate of Religious Affairs, Burma Camp and Chaplain at GMPC until 2006, when he took up the duties of Chaplain as the 37 Military Hospital and Methodist Presbyterian Church at Negheli Barracks in Accra.

Rev. Dr Agbeko served the 37 Military Hospital until 2016 when he was re-assigned to the Military Academy and Training School and the Teshie Camp Methodist Presbyterian Church (TCMPC) as Chaplain, a position he held until 2018 when he retired from the military.

He served at various times as District Pastor of the Kisseman and Adentan Districts of the EPCG in Accra, after which he was appointed the pioneer Synod Moderator of the Meridian Presbytery of the church and served in that capacity from 2014 to 2019.

Before entering priesthood, Rev. Dr Agbeko worked as an evangelist of the EPCG at Dambai (now in the Oti Region) from 1983 to 1986 and also as a farm hand at the EPCG Agricultural Resettlement Project during the same period.

His publications include Biblical Theological and Psychological bases for Training Chaplains, Golden Principles for Self-Discovery, Improvement and Fulfilment, Pray But Pray Alright; and Evening Meal Divisional.

In a chat with The Spectator, Rev. Dr Agbeko, married with four children, said that his father had all along wanted him to become a lawyer, “but I also insisted that the Bible was a law book”.

The friendly priest said that his priorities as the Moderator of the General Assembly of the EPCG included leading the church in the will of God while working with all and sundry to revive it to greater heights.

He contended that that the military also needs “religious direction and guidance,” hence his decision to train as an army officer.

The Moderator of the General Assembly of the EPCG speaks Ewe, Twi and English.

He is the second native of Adaklu to lead the EPCG in that capacity, many decades after the Very Reverend Andreas Aku from Adaklu-Waya served the church as its first Moderator, and left office in 1922.