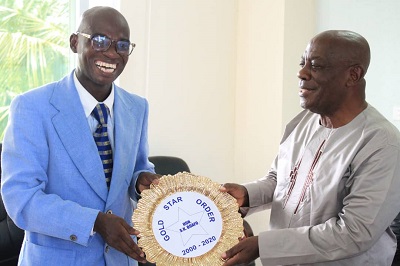 The Board Chairman of the Minerals Commission, Samson Kwaku Boafo, has received the “Gold Star Order of Excellent Leadership” award for his service to humanity.

The award was conferred on him last Monday in Accra by the Global Public Excellence (GPE), an initiative established by the former United Nations Secretary General, late Kofi Annan, a release from the Communications Department of the commission copied the Ghanaian Times said.

Dr  Kwame Fordjour of GPE who presented the award to him at a brief ceremony in Accra on Monday noted that “Mr S K Boafo had put Ghana on the global map as the 10th globally recognised achiever of this honour, the third African and first Ghanaian rated between 2000- 2020.”

His nomination for the award followed his distinctive successes chalked in contributing to national development and that of the global community, especially during his chairmanship role of the Inter Racial Community Project in Hackney, London.

A citation on the award read: “On this historical day, we honour Mr S.K. Boafo in fulfilment of your service to humanity, global peace, and prosperity to mankind”.

Present at the ceremony were the Chief of Gomoa Odumase, Nana Akumanyi Essandoh who is the Chairman of SDGs Innovations Africa, Mrs Judy Crayam, Minerals Commission board member, Chief Executive Officer of the commission, Addae Antwi-Bosoako, and his deputies Joseph Kwaku Nayan and Martin Ayisi.

Mr Boafo expressed his delight for the award and urged Ghanaians to be dedicated to the service to humanity wherever they got the opportunity to serve.