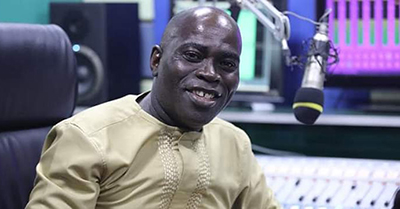 He passed on this afternoon after he was rushed to the hospital last Saturday following a short illness.

He was known for his cultural background, and poetry.

Daniel Adjei Peprah, a renowned broadcast journalist popularly referred to as Nana Agyei Sikapa in the radio industry was born at Atwima Nerebehi in Ahafo Domeabra.

He attended Nerebehi R/C and progressed to Nyinahin L/A Primary. After his elementary school, he went to Nyinahin L/A Middle, where he successfully passed the Middle School Leaver’s Certificate Examination. He gained admission at the Atebubu Training College in 1987 and completed a four- year certificate programme in Education in 1991.

In 2003, the famous and affluent Dr. Osei Kwame, Chief Executive Officer,CEO of Despite Group, invited Nana Adjei Sikapa to join Despite Media as a newscaster, after his stints with Garden City Radio in Kumasi.