“Say no to pregnancy before marriage” 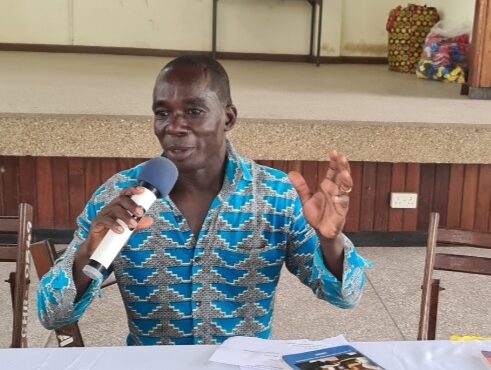 The Chairman of the Family Life Committee of the St. Augustine Catholic church at Ashaiman, Mr Peter Mensah Tweneboah, has advised the youth especially single ladies not to fall for calls from men to get pregnant before they marry them.

“Do not fall for men who say pregnancy before marriage because it is wrong” he said.

Speaking with The Spectator on the sidelines of the first edition of a ” Marriage Focus  Programme” organised by the Family Life Committee of the church, Mr. Tweneboah described the practice which was gradually becoming common in the country as wrong in the eyes of God.

He observed that some young ladies had fallen for that proposal of pregnancy before marriage and had ended up as frustrated single mothers because the men did not honour their side of the “contract”.

“If you want to know whether a person could bear children or not, go to the hospital to check” he said.

The Chairman said it was even wrong to make child-bearing a condition in marriage because not all marriages would bear children which was  not the ultimate in marriage.

He advised the youth to let the word of God be their focus when choosing their life partners because marriages built on the word of God were more likely to stand trials and temptations which included childlessness or delay in bearing children.

“We have all heard the story about Abraham and Sarah who had their children in their old ages. They focused on God and that was why they were able to go far” he explained.

Mr. Tweneboah said pregnancy before marriage amounted to fornication which could lead to contracting sexually transmitted diseases and that those waiting to get married should rather take it to God in prayer instead of taking the easy way out.

The Family Life Committee of the Catholic Church is a Committee that is in charge of singles, pre-marital and post-marital counselling in the various Catholic churches aimed at the development and sustainability of the family.

Addressing participants at the programme under the theme “Communication in Marriage”, the Chairman said the church could only continue to grow if marriages were strong and husbands and wives communicated effectively with each other as well as played their various roles as expected of married couples.

He said it was sad that despite technology, many couples were still not taking advantage of it to improve their day to day communication and could go for days without talking to each other whether they lived together or apart.

He charged couples to eschew complacency and assess their marriages from time to time to know where they fell short and work at them because some relationships which were good had gone bad and even looked irreparable.

The Secretary to the Committee, Mr. Suluvan Ayuuba also said because a couple came from different backgrounds and no human was perfect,  there was bound to be challenges but that should not cause relationships to be strained and urged couples to  study each other and know how to make life better.

A Member of the Committee, Mr. Emmanuel Adzakpa noted that when communication was poor it bred unccessary suspicion, tension and even affected the prayer lives of the couple.

He said this also went a long way to affect children in such homes who may even take advantage of the communication gaps between their parents to misbehave.

Another Member of the Committee, Ms. Innocencia Dadzetor highlighted the need for patience and forgiveness in a relationship because it was key to grow healthy marriages.