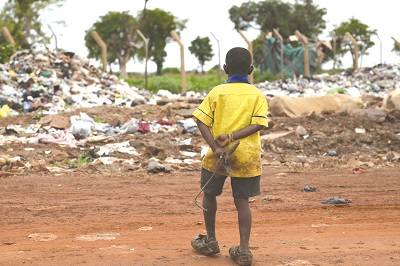 Some adults and children in the Northern Regional Capital, Tamale, have found another means of making a living without joining the bandwagon of migrating to Southern Ghana in search of non-existing job.

A lot of northers are in the towns and cities of Ghana engaged in menial jobs and conditions under which they live are not dignifying, to say the least.

Women as well as children in school uniform, on a daily basis, make their way to the one of the city’s landfill sites to ‘dig for goodies’ after waste collection trucks have offloaded heaps of garbage.

According to some residents, the practice has been in existence over the years and is a source of livelihood for those who engage in it.

Sheriff and Majeed, both aged nine, are among the many children, captured by our Photographer Mr. Geoffery Buta, as they ‘invade’ the dumping ground before, during, or after school hours.

With sharp metal bars and sacks, the children head for the refuse site and spend several hours on the heaps of garbage for anything they find useable. Other children between eight and 15 years compete’ with adults as soon as the refuse trucks pull up.

Sheriff said that on one lucky day, he found a wrist watch which he later sold at seven cedis (GHC 7.00). Madam Fuazie Iddrisu one of the adult scavengers, admitted that they earned some living from the landfill site by selling some of the ‘valuables’ they found.

Mr. Fataw Abubakar, a scrap dealer at the landfill site said, the number of scavengers in the area had doubled as the population in the city increased.

“On Mondays, the refuse dump looks like a ‘market day’ where you see hundreds of scavengers especially women and children of all ages rummaging the garbage”, he said.

He said many of the scavengers had lived almost all their lives near the landfill site, and that some children started following their parents to the site as early as age five.

Explaining the risk the children especially were exposed to at the site, Mr. Abubakar, recounted a sad encounter when a child was run over and killed by a refuse truck that had come to offload refuse.

A waste management official, who pleaded anonymity, noted that the authorities in charge of the site had tried and failed on many occasions to stop the children especially from coming to the dumping ground.

“Many of them complain it is their livelihood, so they should be allowed to continue,” he said but noted that the completion of a solid waste management project would help control the activities of the adult and child scavengers.