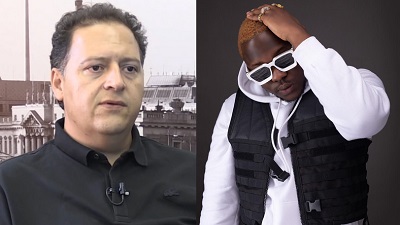 Medikal and the son of the world-famous notorious drug lord, Pablo Escobar, have reached out to each other.The Ghanaian rapper took to Twitter to announce that he can’t wait be heading to Colombia after having a conversation with Juan Pablo Escobar, the only known son of the Colombian drug lord who died in 1993 as the wealthiest criminal.Some tweeps doubted Medikal made true contacts to Juan Pablo and he has gone to the extra mile to clear the doubt by sharing a screenshot of the conversation he had with the 43-year-old man who is an architect and an author who now lives in Argentina.In the screenshot seen by pulse.com.gh, Juan wrote “Welcome to Colombia” and after Medikal’s response, he added that “let me know when you travel to see what you are treated with love”.

It’s, however, not known how the two became connected and how long they have been conversing but what is known is that Medikal has a special treatment from, Juan Escober, who now goes by the official name Juan Sebastián Marroquín Santos, a new name he chose in his bid to distance himself from his father’s crimes and any illegal activity.

Juan Sebastián has also at number of times disclosed that he is not interested in visiting his home country, it is therefore not known, the exact plans he is having with Fella Makafui’s husband. who is saying he can’t wait to be in Colombia after his chat with Juan.